London, Paris, Amsterdam and Broadway on the Rhone

It’s hard to believe this day is finally here! We started planning this trip in February 2016 when Playbill Travel announced their inaugural river cruise. This will be our first as well, while it’s our fourth vacation built around a Playbill Broadway Cruise. This ship, Uniworld’s S.S. Catherine,  holds about half the passengers of the Broadway at Sea cruises from the past few years. This cruise actually sold out before it could go on sale to the public.

We weighed some options and building around the cruise, we came up with a pretty exciting trip. Nineteen days in Europe, start to finish. We start with five days in London, then take the Eurostar train to Paris for three days, followed by the Broadway on the Rhone River Cruise and finally three days in Amsterdam before flying home.

So here’s a quick preview of our trip:

Having just visited last September, we saw many of the historical places of interest and found how easy it was to get around using the Tube. This time we’re seeing nine shows (yes, nine shows in 5 days) in the West End. We’re staying at the incredibly beautiful, St. Pancras Renaissance Hotel again which connects directly to the Eurostar at St. Pancras International. When we’re not in the theatre, we hope to visit a few of the museums and places we didn’t have time to get to on our last trip.

Our first time. So many things we’d like to see and do– but we’re keeping our options open so we can focus on enjoying the ambience of the city. Hotel Scribe will be our home base for a few days. We’re definitely making a trip to Versailles, must see the Eiffel Tower and Notre Dame, we’re seeing the show at Paradis Latin and have a short champagne cruise through Paris on the Seine. I’m really hoping to spend time in the Montmartre district and make a quick visit to the island of Grand Jatte. We’ll probably skip the museums this time and have to plan a longer stay in the future to experience more of what Paris has to offer.

Broadway on the Rhone

Sponsored by Playbill Travel, this Rhone river cruise starts in the south of France and visits: Avignon, Arles, Tarascon, Viviers, Tournon/Tain L’Hermitage, Macon and Lyon. World renowned sommelier Jean-Luc le Du will be on board, sharing his love and knowledge of the wines, cheese and chocolates of the region. Evenings will feature entertainment by Broadway veterans Rebecca Luker, Paulo Szot, Liz Callaway and James Barbour, accompanied by Grammy and Emmy Award winning Music Director, John McDaniel.

At the top of my bucket list of places to visit has always been the Anne Frank House in Amsterdam. We’ve already booked our tickets. We also booked a half day trip to Zaanse Schans, Voldendam and Marken in the Dutch countryside. Windmills anyone? There are also several museums and a canal cruise we hope to enjoy, not to mention the necessary stroll through the infamous red light district,  known around the world. I think we’re too late for tulips but you never know!

I’ll be posting what I can, when I can on social media as well as blog posts of our daily activities– though they may be posted later, depending on time and Internet availability. I hope some of you will follow along– join us on our journey!

Dreaming of Versailles and a Sunday in THE Park

We considered it, dismissed it, then couldn’t ignore it. I was dreaming about it.

This is the Château de Versailles.

Dreaming about a place is one thing– actually visiting and experiencing it is something else entirely. There’s nothing as magical as feeling an undeniable connection to a place.

We’ll only be in Paris a few short days and it’s the first visit for both Michael and I. There are so many incredible things to see and do in Paris. Where do we begin? In the initial planning stage for our visit, we did our research, made lists and talked to friends. With so many options, we finally made what we decided was the best decision for us: Experience the city itself and find our own connection– feel it’s vibe. Our visit will be less about the individual attractions and more about the overall ambience the city has to offer.

A few months ago, Michael and I watched the first season of the Netflix series, Versailles.

Louis XIV’s love and nurturing of art, elegance, beauty and architecture inspired the world. Versailles was his dream. A stunning palace that stands as a tribute and glowing example of 18th century French art. At 28 years old, Louis set out to build the greatest palace in the world.

Suddenly, it became all too clear that we had to visit Versailles. I was dreaming about it. This was the type of connection I was looking for– and it made the rest of our Paris planning more clear.

Instead of seeing a lot of historic places because, well, we had to; make the experience personal to us. Enjoying it rather than rushing to see everything we possible can. Granted, we will still see more than most people probably would in three days time– it’s just our own approach completely changed.

A Sunday in the Park

Going all the way back to my childhood, Georges Seurat’s painting, A Sunday Afternoon on the Island of La Grande Jatte (1884) has influenced my life. The musical Sunday in the Park with George, later became one of my all time favorites. But long before the musical, I spent hours in a classroom, staring up at that painting– wondering who those people were. 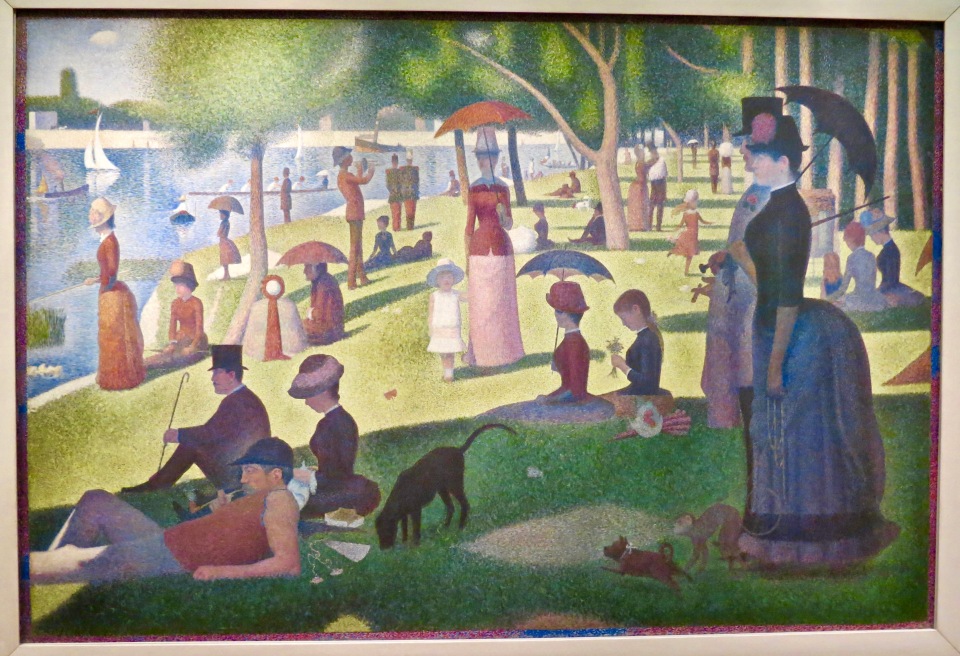 Flash forward– years later– In my college art classes, I spent a lot of time focused on Seurat and his work. Then in my senior year, I drove overnight to Chicago to see Goodman Theatre’s production of Sunday in the Park with George. I had a profound connection to the piece. After college, I had the opportunity to play George in an ill-fated theatre company’s production, that ended up being cancelled, with the demise of the company. Sadly, a near miss.

And one last connection– my biggest audition as an actor– for the second national touring company of Into the Woods— I sang George’s song Finishing the Hat from Sunday. I didn’t get cast but the director had me sing way beyond my chosen 16 bars– so I must have done something right.

When it hit me, I was surprised I hadn’t already considered it. Just recently, it dawned on me that of all the places I really would connect with in Paris– I had to at least try and visit Île de la Grande Jatte. It’s very different from Seurat’s time. There’s very little park there now. It’s mostly a developed suburb, part of an upscale commune at the gates of Paris. And, (I had decided) if I was going to do it– it had to be on Sunday. It might be possible but that Sunday morning is the day we leave for our Rhone river cruise. I think it’s doable, though we haven’t been given the departure schedule yet. The island could take up to 45 minutes to reach. So if we’re up early and on our way, we should be able to make it, even if it’s a very short visit. Our friends George and Mary said they’d be up for the adventure. That makes it perfect because then it can truly be ‘A Sunday in THE Park… with George’.

Hopefully the stars will align. Dreams happen. Weather and time permitting… I’ll be there.