Out of the abyss there is a cry in the dark.

It seems to come closer

Until it becomes a deafening scream.

Fading to a whimper

Another visit of that nightmare gone

Friday morning, I stood alone in a field of flags. Crying. Remembering. I was surrounded by 2,976 American flags blowing gently in the breeze.

3051 children lost a parent that day. Their average age was 9 years old.

I walked through rows and rows of flags in a field of rain soaked grass, I began reading the markers: citizens, police officers, firefighters…. and their ages…. 34, 41, 32… 21.

Lukasz immigrated to America from Poland in July– just two months before. His parents came one year earlier, leaving their two children behind to finish school while they prepared a new home for them in the land of opportunity. When he arrived, Lukasz immediately found a summer job working in food service for Cantor Fitzgerald at the World Trade Center. A start of a new life. America.

Only two short months. His American Dream was cut short. Stolen from him.

This is just one story. One heartbreaking story– of many– that would not reach their natural conclusion. His opportunity, his voice, his life– silenced.

The passing of fifteen years has done little to take away the great empathy and sadness I feel for the many lives lost on September 11th, 2001. My heart goes out to the families whose futures were forever changed– whose hopes and dreams were so unexpectedly taken from them.

I pray that they have found peace.

I pray that they have achieved some level of happiness.

We will always remember.

But life goes on.

These are the stories we must tell. We can’t be silent. We must be the storytellers. Stories of hopes and dreams. We must honor them by passing down their stories of courage. We will never forget.

Every year on this date I take time to remember, grieve, celebrate and honor the many heroes and those that lost their lives on September 11th, 2001. Thirteen years have flown by but the wounds are deep. 2,977 innocent people died on that day and they, as well as their families deserve to be remembered.

In addition, more than 1,400 first responders have also died since 9/11. There are many more that are sick and suffering.

I think it’s important on this day of remembrance to also remember the heroic men and women that have served our country and those that gave their lives in the days since 9/11 to protect our freedoms. To date, more than 8,000 American and Allied soldiers have died in post-9/11 wars.

A close up of the Last Column.

How will you remember this tragic and historic day?

Here is a link to a list of ways you might participate in the National Day of Service and Remembrance.

The photographs I’m sharing here are images I took on the official opening day of the museum at the National September 11 Memorial and Museum in New York City on May 21, 2014.

You can see more images I shot that day by clicking here.

Even as the buildings collapsed, the slurry wall held back the water that would have flooded Lower Manhattan. 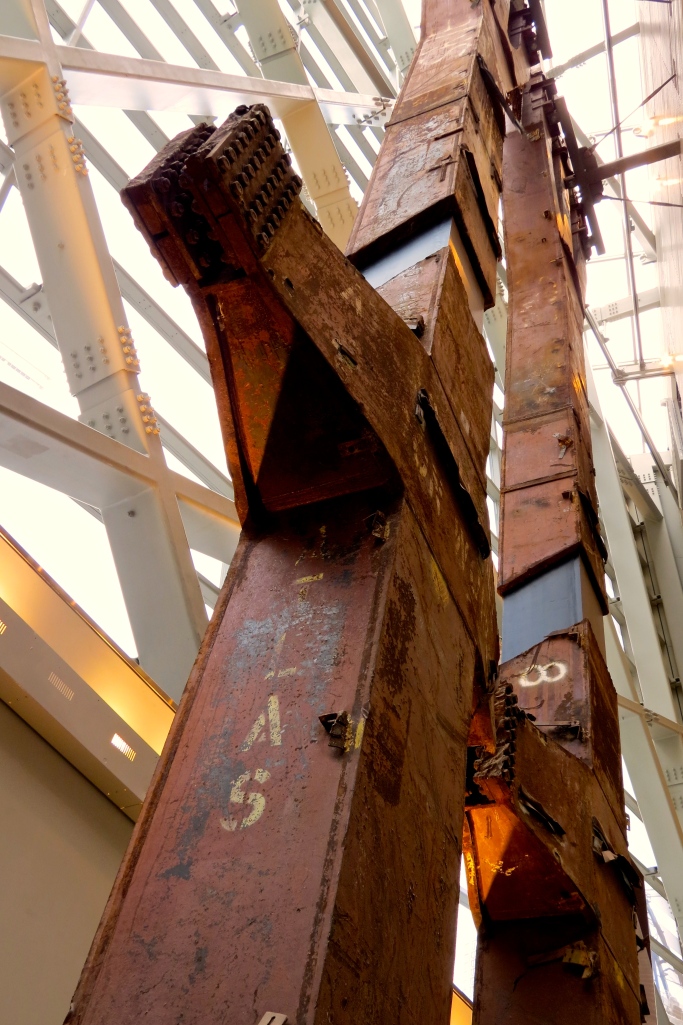 A lot has changed in our world since then. Some good, some bad. I can honestly say I don’t feel any safer today than I did immediately after the attacks. I will say though, that I think America needs to be very cautious and not let fear and hate win over reason when it comes to national security and our place in the world. War does not equal justice and war does not always protect us in the way it is intended.

In today’s world, it makes us a bigger target.

I miss the unity I felt in the days and months after 9/11. We came together as a nation then. With all that is happening in this country and around the world, we need that now more than ever.

Behind this wall lie the unidentified remains of many that perished on 9/11/01.

I didn’t wave any flags this year or post any inspiring patriotic posts on Facebook or Twitter. In fact, for the most part, I tried to avoid social and new media coverage. It’s twelve years after the 9/11 attacks that claimed the lives of nearly 3,000 innocent people and the images of that day — the feelings of loss and mourning — are still fresh in my mind.

Instead of letting others tell me how I should feel, remember or memorialize those events, I chose to grieve privately. I chose to focus on the memories of the lives that were lost, the families that were broken apart and the heroes that will not live to see another day.

In the days leading up to this anniversary, I heard people suggest that maybe it was time to move on. Tell that to families. Yes, it’s true that life goes on, must go on… but to suggest that we can, or should, put that day behind us, is not only insensitive but also ignorant and disrespectful.

History repeats itself when we choose to forget.

Last January, I was privileged to accompany a group of students to New York City and that visit included a visit to the 9/11 Memorial. A handful of those students had been in my play, September’s Heroes, a docu-drama surrounding the events of 9/11 in the fall of 2011. Even though we spent two months working, researching and then performing the play– I think it was still somewhat distant to them.

Visiting the 9/11 Memorial brought that all together.

Standing on that hallowed ground, realizing that the two massive pools were the footprints of where those two towers once stood and reading the names etched around those pools made it real for them. It was emotional. It was extremely emotional for me, seeing that link come together. It brought history to life for them– a moment in time that they were almost too young to remember.

There are now school-aged children who weren’t even born when those towers fell. They need to know what happened.

They need to know why we are talking about our rights to privacy, why there’s an ongoing war on terror and why they have to remove their shoes at airports. They need to know.

We are the memory of those that were lost. We are the link to that moment in history that has led to significant changes in all our lives.

We are the storytellers.

Today is a day of Remembrance. Eleven years ago the world changed… at least my world changed. Every generation has defining moments that go straight to the core of their being. September 11th, 2001 in mine. I thought I’d share an excerpt from my play, September’s Heroes in honor of the occasion.

To the Wife of Falling Man:

I can’t imagine what your life must be like now… or what it was before.
For over 10 years you’ve awakened in the middle of the night, crying, reaching out to the emptiness in the bed beside you. Reaching out for the man that you adored. Gasping for breath between sobs and clutching the pillow where he once so peacefully slept.

I can’t imagine what your life must be like now… or what it was before… saying your last goodbyes. You’ve played those moments over and over in you head…things that you thought…things you should have said. Just another morning… a beautiful, extraordinary September day.

I can’t imagine what your life must be like now… or what it was before… the moment you heard… time forever frozen on that day. Playing over and over… slow motion in your head. The pain you felt… the pain you feel today.

I can’t imagine what your life must be like now… or what it was before…reporters at the funeral asking for you…asking you to identify pictures… pictures you’d already seen… pictures that made you turn away. Pictures of your brave, daring falling
man.

I can’t imagine what your life must be like now… or what it was before…the story you created to get you through the day… day after day. What had happened…what it was like… playing like a movie in your head.

You and I had only met once, so very long ago. The fact that you honor me, remember me in your movie… flatters me to no end.

It was just another day, like so many before. It was only Tuesday but he was excitedly telling me of the weekend plans you had in store. When the chaos broke out, explosions ripping through the floor, your brave and dashing hero, covered me… shielded me… protected me… as if I were you.

He helped me up… and it was if we floated… almost like a dream. Death and destruction surrounded us… and nothing in between. As we stood shaking… trembling, staring out through the smoke and the fire. We knew this was the end. Knowing we would never say goodbye. Staring… staring… staring through the hole… at the clear, blue September sky.

He grasped my hand so tightly and walked me towards the light. He turned ever so sweetly… and said, “This is for my wife.” He embraced me and he kissed me standing on the brink of time… a single tear rolled down his cheek, and he turned back towards the sky. I knew then in that moment what he was going to do. I looked at him, so peaceful… all his thoughts on you… he was gone in one quick moment… but he didn’t jump, he flew.

The scene ends so abruptly… goes instantly to black… but no credits role… just emptiness and silence… the silent screams deep in your soul.

I can’t imagine what your life must be like now… or what it was before… you take a deep breath… you remember… and life goes on once more.

Missing posters displayed throughout New York Ctty in the days and months following the attacks. 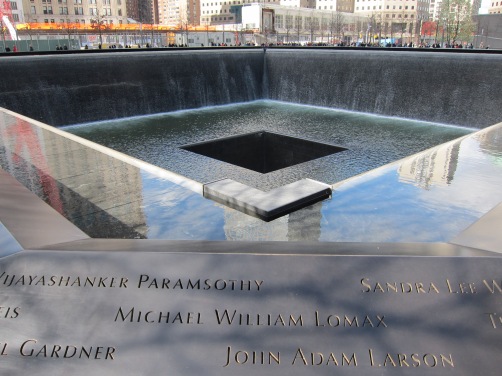