The GMO Skinny: What You Need to Know about GMO: Genetically Modified Foods

You’re already eating them and most people don’t know it. Some of the food on your table has been altered to produce toxins— toxins that are entering your body. It’s not on the label and it may not be safe.

GM or GMO foods (Genetically Modified Organisms) are now making their way to grocery shelves, in restaurants and into your home. The biggest concern for consumers should be the results of studies showing the adverse affects of GM foods on the digestive system, liver, kidneys, and reproductive organs of the animals tested. They have also been linked to premature aging. The studies  show the consumption of certain GM foods have caused allergic reactions to other normally non-allergenic foods that didn’t previously exist.

To put it in the simplest terms, GMOs are plants and animals that are genetically altered by inserting or splicing the genes of different species with the goal of a specific result. For example, combining the genes of a fish and a potato. Scientists are crossing species barriers set up by nature. They are creating hybrids that would be impossible to occur naturally. It’s also known as Genetic Engineering.

The official reasoning behind genetic modification is to produce crops that offer improved yields, enhanced nutritional value, tastes better, have a longer shelf life, and are resistance to drought, frost, or insect pests.

Unfortunately, to date, there is no proof of any increases in the quality of GM foods either in yields, taste or nutritional values over Non-GMO foods. Modified GMO crops that have increased primary pest tolerance, start to be attack more readily by secondary pests, requiring further engineering  and genetic modification. Herbicide tolerance in GMOs, allows and encourages the higher usage of chemical herbicides on food crops to kill weeds, increasing their overall toxicity. The most common used herbicide is Monsanto’s Round Up.

The genetic engineering of plants often requires the alteration of more than one single trait, when that trait fails to completely fulfill its intended purpose or when multiple results are desired. Stacked traits in one particular GM corn hybrid has eight GM traits to alter insect resistance and herbicide tolerance.

GMOs are rapidly changing the natural balance of our ecosystem, causing a chain-reaction effect that cannot be reversed. The environmental effects of these changes may not be felt immediately but will take years to accurately measure and understand. Geneti modification cannot be undone. To better understand this, look at the serious long term affects the Japanese Beetle and West Nile virus are creating after being artificially introduced into other parts of the world other than their origin. They affect all elements of the environment (i.e. plants, animals, humans) directly, as well as the effects caused by the use of new chemicals introduced into the ecosystem in an attempt to combat them.

The genetic engineering of plants often requires the alteration of more than one single trait, if that trait fails to completely fulfill its intended purpose or when multiple results are desired. Stacked traits in one particular GM corn hybrid has eight GM traits to alter insect resistance and herbicide tolerance.

“Most studies with GM foods indicate that they may cause hepatic, pancreatic, renal, and reproductive effects and may alter haematological [blood], biochemical, and immunologic parameters, the significance of which remains to be solved with chronic toxicity studies.” – Dona A, Arvanitoyannis IS. Health risks of genetically modified foods. Crit Rev Food Sci Nutr. 2009; 49: 164–1751

GMO labeling is not regulated or required in the United States. Legislation to require labeling is being fought by the major corporations that use GM ingredients in their products. Currently, 60 countries around the world, including the European Union, have very strict laws regarding GMOs, if not completely banned altogether. You can see a list of countries and what is banned: here.

The genetic modification of animals foods is best explained by the wide usage of antibiotics, growth hormones and outright genetic engineering; in addition to GMO feed used in animal production. 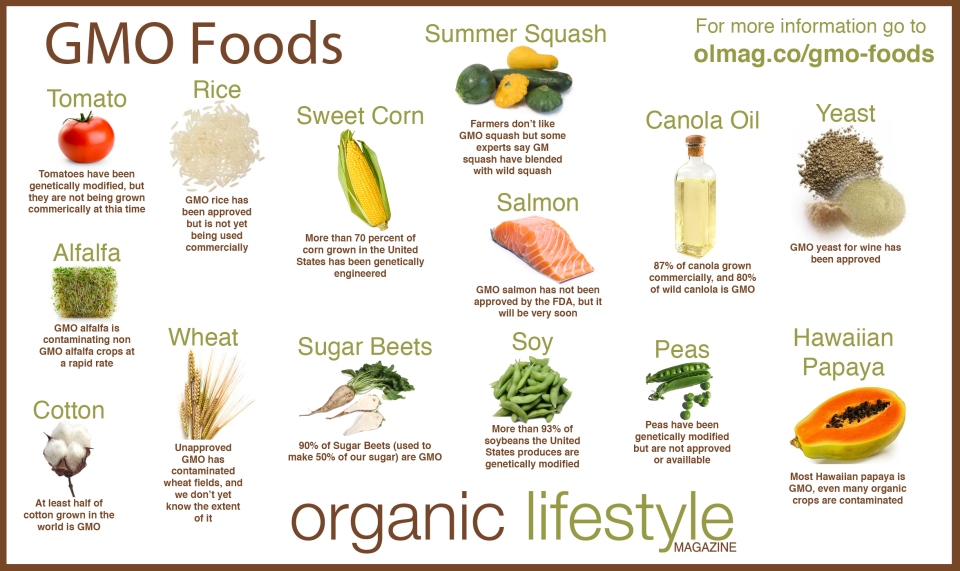 The production and human consumption of GM foods is still in its infancy. Very few studies have been done to even begin measuring the effects it  has on people and the environment. The limited studies performed on animals show potentially dangerous and life-threatening consequences.

I highly recommend you download the full GMO Myths and Truths PDF file and read it carefully.

Here’s another link: Former Pro-GMO Scientist Speaks Out On The Real Dangers of Genetically Engineered Food.