Tag Archives: The Cradle Will Rock

A view on The High Line.

Monday we met with our friends Steve & Amy (from home) who happened to be in NYC this week as well. We had a great time socializing and made our first visit this trip to The High Line with them. The High Line, which runs above Gansevoort Street to 34th Street on Manhattan’s West Side, is a public park built on what was once a historic freight rail line. It was a beautiful sunny day and only took us about an hour to walk the whole park. We’ll be returning with other friends from home later this week and hopefully I’ll get some good pictures to share.

Short on time, the four of us headed back to Times Square and Havana Central (our second time this trip) for lunch before parting ways. 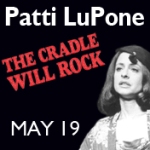 The Cradle Will Rock We actually had tickets for another show that we ended up giving to friends. When we found out that this special, one night only, benefit concert was happening, we couldn’t miss it.

I’m a huge fan of Patti LuPone. Given the opportunity, there was no way I was going to miss the chance to see her recreate her Oliver Award-winning performance in this historic, ground-breaking theatrical work.

The staging was a benefit for The Acting Company, which originally produced the show under the direction of John Houseman. This concert staging directed by Lonny Price, featured LuPone and a number of other original company members, as well as more recent alumni.

This is a work I hope to produce one day. Its political and social message are still relevant today and I have a specific vision for staging the piece.

Tuesday, Michael and I both did a lot of exploring on our own. I’m not sure how much ground Michael covered but I’d traveled over five miles (tracked on my Fitbit) before noon. We initial thought we’d find a new destination to visit and then decided to just explore instead. The great things about a big city is there’s always something new to see, it’s always evolving and there are always things you hadn’t noticed before.

Friends arrived in the afternoon and while I was off exploring 6th Avenue and Bryant Park, Michael accompanied them to the TKS booth to get their show tickets and then to stand in line for the lottery for Kinky Boots tickets (which they won).  We had dinner at Yum Yum Bangkok before splitting up to go to our shows. 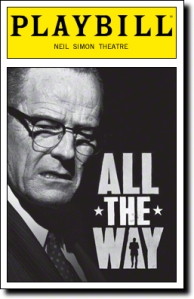 All The Way “All the way with LBJ!” Bryan Cranston IS LBJ. You won’t see any evidence of Walter White (Breaking Bad) on this stage. From his first breath in a solo spotlight, Cranston gives an incredibly layered performance as President Lyndon B. Johnson, proving his versatility and skill as as actor and showing that a true performer can successfully thrive on stage and screen equally.

Written by Robert Schenkkan and directed by Bill Rauch, All The Way follows LBJ’s journey from the Kennedy assassination through Johnson’s reelection as President. It carefully weaves the personal, public and political struggles LBJ had to juggle while blazing the trail in his fight for civil rights.

The story was skillfully told by an ensemble of veteran actors, supporting Cranston. Some of the other stand out performances were given by Brandon J. Dirden as Martin Luther King, Jr.; Betsy Aidem as Lady Bird Johnson/Katharine Graham/Katharine St. George; Michael McKean as J. Edgar Hoover/Robert Byrd; and Robert Petkoff as Hubert Humphrey.

All The Way is Tony-nominated for Best Play and Best Actor (Cranston), and has already won the Outer Critics Circle, New York Drama Critics’ Circle and the Drama League awards for Best Play.

On the way back to our apartment, we stopped and picked up Concretes at the Shake Shack. (8th Ave. & 44th St.) With multiple locations, this is THE spot for ice cream treats in New York City. The lines are almost always out the door but they move fast and you always get great service.