Home » Uncategorized » HATE is alive and well in Bartlett, Illinois

HATE is alive and well in Bartlett, Illinois

I’m so furious right now I can barely see straight.

I have to back up a bit. As the Auditorium Manager at Bartlett High School, I have the never ending battle of keeping the auditorium secure. It’s supposed to be maintenance’s responsibility… backed up by our school’s dean’s assistants. With all the cut backs, man power is low and things like security have been left to suffer. At one point in my career at BHS, the auditorium was not allowed to be used if I was not present. Because it is used so much between 7 am and 11 pm and there is no money for overtime, I am only allowed 40 hours, much of which is spent either setting up events or running sound and lights for them. There are a lot of meetings that take place needing no direct technical help, mostly during the day. The auditorium is supposed to be locked up until it is used and then locked immediately after. So guess what is left unlocked all the time?

A few months ago, maintenance moved some rolling units out of my secure shop area and left them backstage. As a result, I had three 50’s style microphones stolen before I was aware the items had been left in the less-secure backstage. This past Monday, I came in and found things not as they should be, but the doors were locked. On Wednesday, I found out it was because a dean’s assistant found eight students smoking in the costume loft backstage.

Today topped it all. Someone must have found an unlocked door, found a can of spray paint and painted the N-word in huge letters across a four foot by eight foot set piece backstage.

Today’s Pic of the Day: Snow finally hits the burbs of Chicago. (It was 53 degrees yesterday.) 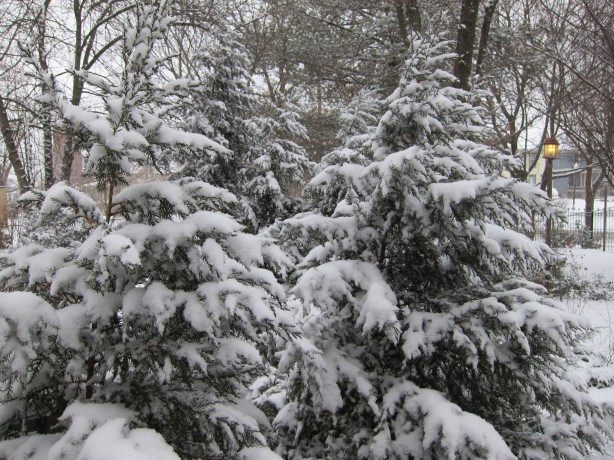