Home » Uncategorized » I Need A Clone

I Need A Clone

I need a clone. No, I mean it. I REALLY need a clone… not that the world would be able to handle TWO of me. Maybe I just need two brains and four hands… oh, and another mouth. (No, that wouldn’t be good.) When I’m busy I always seem to be trying to think, process and want to be commenting on two things at once. No, on second thought… I better have a whole clone. One that can be cleaning while I’m writing my blog, for instance. It would also be nice to send one to parties while I’m working or vice versa.

Maybe some sort of ‘thought processor’ or secretary would work just as well. I find myself constantly in the middle of something and thinking, I have to remember to say (or do) that… and then of course, I forget. It’s especially bad when I’m leading a project or directing. We can be working on a scene and I’m making mental notes as it goes and then I only remember about half of them when it’s done. Writing them down is fine, but then I’m missing something else.

Have you ever been working on a project with a group and tried to just supervise and delegate? It’s especially difficult when it’s your project. I am very hands on so this is something I struggle with daily. It’s not just one thing. It isn’t that I don’t trust other people to do something right or think that I can do it better. Sometimes it’s because I can do it quicker, or quicker than I can explain it. Sometimes it’s just something I feel I need to do or want to do.

As I’ve gotten older, I’ve become much more of a morning person… an early morning person, that is. I wake up with all these thoughts and ideas and make a mental list of what I hope to do that day. I’m usually lucky if I complete one or two items on my list. I refuse to do something half-way which is why my list never seems to get any shorter. The start of one project always seems to blossom into four more. A clone would allow me to pass those additional projects on, while I focused on completing the original task.

Of course, if I really did have a clone I’d probably spend too much time arguing with myself about who should do what, when and how. Then what would I accomplish?

Today’s Pic of the Day: Two become one… Paw prints in the snow. 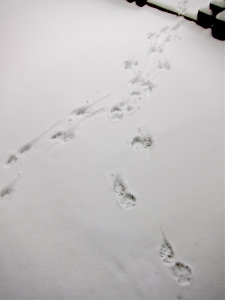 By jlinamen1229 in Uncategorized on February 1, 2012.
← Accentuating the Positive What Is A Family? →