Thursday was a huge day for us, to say the least. It’s hard to believe how fast the week has gone and I can’t say I was looking forward to returning home.

The South Tower Pool at the 9/11 Memorial.

I’d gotten our passes for the 9/11 Memorial prior to our trip and we were the first group of the day. You have to go through all the same security procedures as you do when you fly, so the process takes a little while and you can not enter the site without passes.

Having had my play, September’s Heroes produced by Bartlett High School last Fall, this visit held a special importance to me. I will be forever emotionally tied to the tragic events of more than ten years ago and needed to pay my respects and hoped it would help my ongoing grieving process.

Currently the memorial is surrounded by construction on all sides. The new World Trade Center is quickly climbing into the sky adjoining the memorial and the 9/11 Museum which is set to open later this year. Right now, you can visit the two mammoth pools that mark the footprint of the original North and South Towers of the original World Trade Center. Surrounding both pools are all the names of those that lost their lives in the 9/11 attacks, including those at the Pentagon and in Pennsylvania. 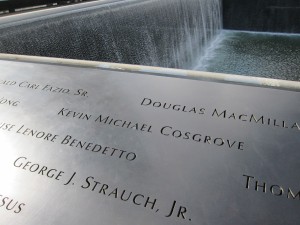 Kevin Cosgrove perished in the South Tower of the World Trade Center.

The moment that hit me hardest was finding the name of Kevin Cosgrove, who’s devastatingly powerful 911 call from the South Tower, up to the moment it fell, was the inspiration behind one of the segments of my play. Seeing his name brought back all the memories. I walked around both pools, trying to read all the names, never wanting to forget that moment. It will always be a part of me.

When we left the memorial, we headed down to Battery Park and decided to take the ferry to Ellis Island. I hadn’t realized that Michael had never been to the park. The damaged Sphere from the World Trade Center Plaza is displayed there and you have a great view of New York Harbor and the Statue of Liberty.

We got tickets and went through security (again) and boarded the ferry. The Statue of Liberty is closed for renovations at the base level, so we opted to stay on the boat (you can still walk around Liberty Island) and just go to Ellis Island. I’d been to the statue before, walked up to the crown, in fact, but in all my trips to New York, I’d never visited Ellis Island.

I believe most of the buildings surrounding the main building are being renovated. The main building houses Registry Hall where new immigrants to America waited for processing. There are a lot of exhibits in rooms surrounding the great hall, full of pictures and information about the many years when Ellis Island was a working, entry point into the United States. As far as I’ve been able to research over the years, none of my ancestors came through here. There are many ways you can search, by computer or with assistance (and an appointment) for records of those that arrived. 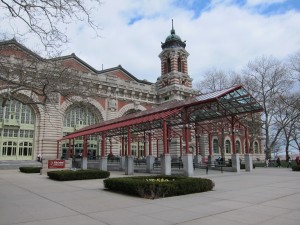 One of the reasons I chose to visit on this trip, is my work on the production of RAGTIME at school. I hoped visiting would give me some additional knowledge I could bring back to the students of Bartlett High.

There is a scene in the show that depicts the immigrants arrival and I found a lot of good information about how the immigrants lived once they had been processed and struggled to survive in their new world.

A funny side note– while we were waiting for the ferry back to Manhattan, one of our New York friends sent Michael a text asking him if we were ready to slit our wrist yet… knowing we’d seen two heavy plays the day before, and then visiting the 9/11 Memorial and Ellis Island (maybe you had to be there). 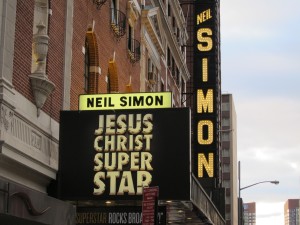 We had enough time to stop at our hotel and freshen up before our final show, number twelve… the Broadway revival of Jesus Christ Superstar.

This was not a good choice to end our trip.

The best way I can describe the show is a huge mish-mash of costumes, time periods and effects… or a big conglomerate mess. From hip hop and Glee to time lords (or Star Wars) and leather…. it didn’t appear anyone could make up their minds what to do with this production. I felt that with all the technology they were using, this was the worst lighting of any show we’d seen. They didn’t even use their CNN-style scrolling ticker effectively. Just a mess. I won’t even get in to the casting or the switching of who sings what… Just an emotionless mess. I’d wished we’d seen Godspell instead.

As is our tradition, we stopped on the way back to the hotel and picked up a pizza from Famous Famiglia in Times Square and called it a night. 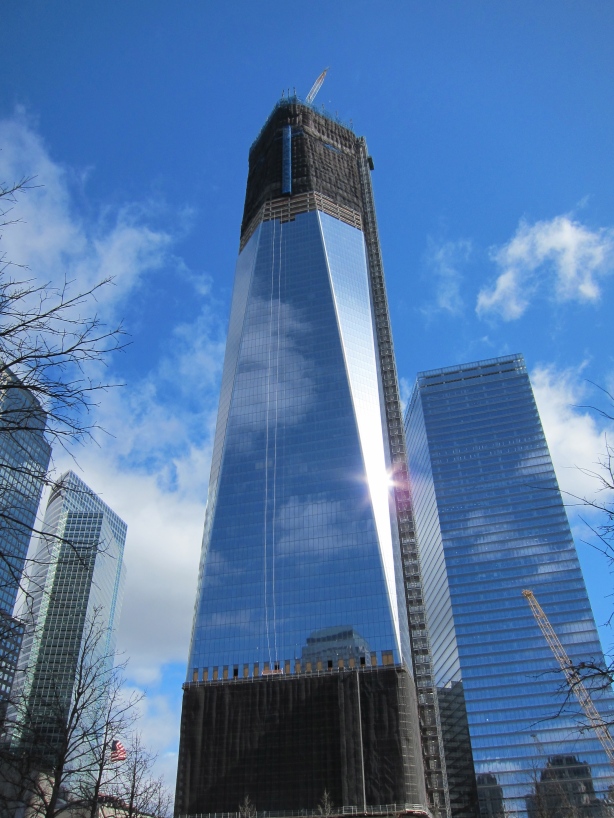