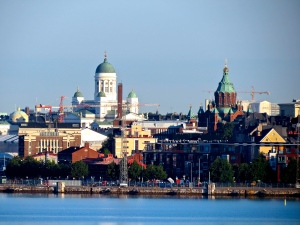 Our view of Helsinki as we sailed in to port.

Helsinki is the beautiful, urban capital city of Finland. Full of history and culture it is also the largest, most populated city in Finland. We took the four hour, “Walking Tour of Helsinki”, which wasn’t nearly enough time to see all we would have liked to have seen but our guide gave us a really nice cross section of the historic and modern influences the city has to offer.

Our guides in both Turku and Helsinki stressed the importance and strong government support for education in Finland. Most education through university, is free, even to foreign students. To graduate though, in addition to the Finnish language, you must learn and show a mastery of the Swedish language as well, even though less than 5% of the population are native Swedish speakers. The reasoning is due to the close social and economic ties with Sweden. If I remember correctly, English is taught to students beginning in the third grade. I found this very impressive. 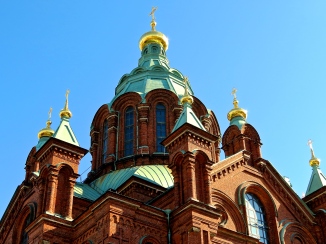 Our first stop was the Uspenski Orthodox Cathedral, the largest orthodox church in Western Europe. It was designed by Russian architect, Alexey Gornostaev but wasn’t built until after his death in 1862.

Next we visited Helsinki Cathedral, the Evangelical Lutheran Church of Finland, in the center of Helsinki. It’s main structure is in the design of a cross with a large main dome surrounded by four smaller domes. The domes were added later, modeled after Saint Issac’s Cathedral in Saint Petersburg, Russia. 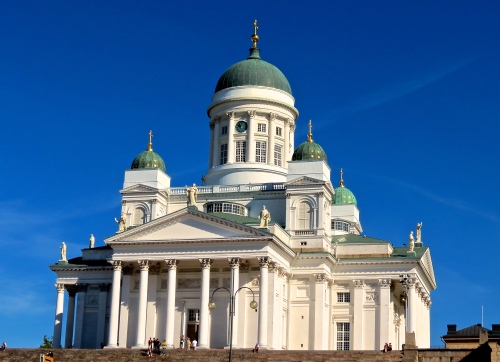 The interior, though simpler than many of the Russian cathedrals we would visit later, is quite stunning with its high arching peaks. 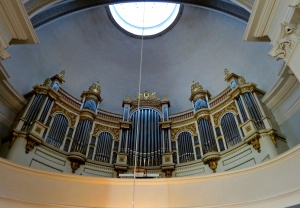 The magnificent pipe organ and choir loft of Helsinki Cathedral.

I found it interesting that the choir lofts in most of the churches and cathedrals we visited are behind the congregation and mostly hidden from view.

Great care is taken in the renovation and maintenance of these iconic Finnish landmarks.

We then walked through the more modern streets in the heart of Helsinki and saw many examples of historic and modern architecture and also many, many buildings dedicated to the arts.

Taking a break from our walk, we stopped at an intriguing little local restaurant for blueberry tarts, coffee and tea. It was tucked away in a much more densely populated part of the city that you could easily miss. The decor was quite eclectic and I couldn’t resist snapping a picture of the colorfully-lit bar just inside the entrance. I loved the atmosphere in this place. 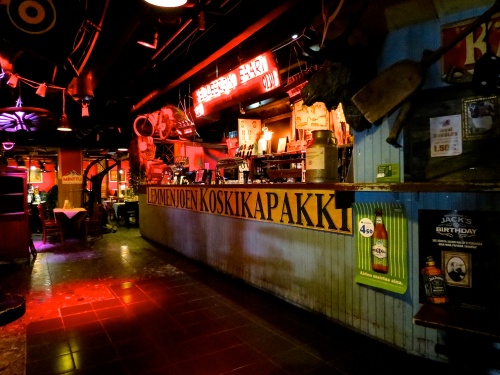 A hidden gem in modern Helsinki. 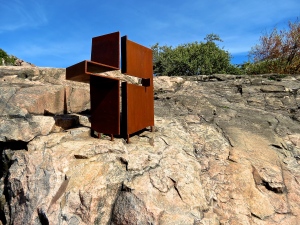 Outside the Church of the Rock in the center of Helsinki.

Then we came to a large rock hill, roughly the size of a city block, surrounded by business and apartment buildings. Inside this rock is the Temppeliaukio Church, also know as the Church of the Rock. It is a Lutheran Church built in the late 1960’s inside the excavated rock. From the outside, the land appears mostly undisturbed, similar to the exposed rock clusters you’d find in Central Park, NYC. Inside, you find a gorgeous modern church, rock walls, copper ceiling with natural light warming the center. 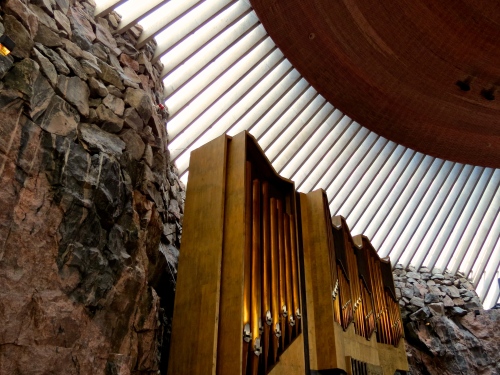 Inside the Temppeliaukio Church, also know as the Church of the Rock. 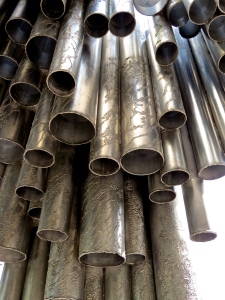 A close up shot from underneath the Sibelius Monument.

We got on the bus to travel a short distance to our final stop on our tour, Sibelius Park. Here stands the Sibelius Monument to honor Finland’s great composer, Jean Sibelius.

Sibelius (1865-1957), was a prolific composer, particularly in the 1920’s and is probably best known for his composition, Finlandia and his symphonies.

Apparently, there was quite a controversy over the monument and its modern art design when it was erected in the late 1960’s. I love its design and think it’s a fitting tribute to the late composer. 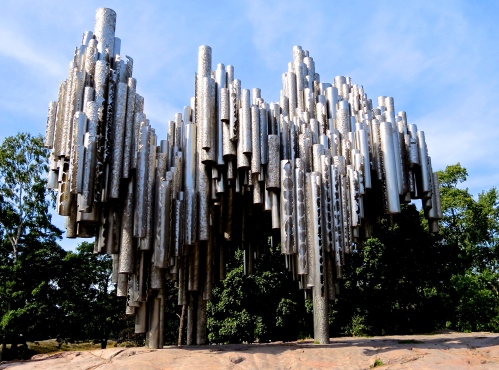 The Sibelius Monument in Helsinki, Finland. 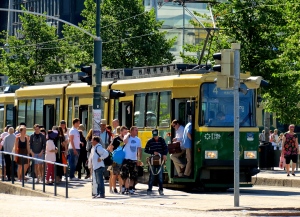 Thousands of residents travel each day by the Helskini trams.

So there are the highlights of our whirlwind tour of Helsinki. I really loved the blend of historic and modern architecture.

The city was busy, yet didn’t give you that overwhelming, rushed feeling that many new city surroundings can give you.

I was also impressed by the elaborate transportation options in the city. Fewer cars and many bicycles, trains, buses and trams for travel.

Back on the Voyager, we ended the day with a fabulous dinner followed by this breathtaking sunset. A perfect ending to perfect day. 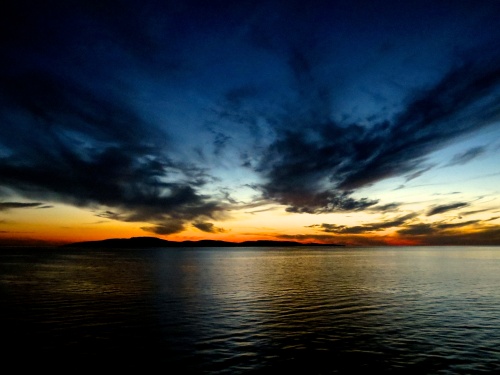 Finnish sunset on the Baltic Sea.