It’s hard to know where to even start this post. I have so much I want to say– that to include it all in one post would be impossible. I’m going to try to keep this post focused on our visit to Stutthof, itself; and I’ll follow up later with a more personal post about my feelings on the subject of the Holocaust and my commitment to the importance of retelling the horrific story that can not and should not be forgotten.

I must say here that my involvement in education about the Holocaust began nearly twenty years ago with a play adaptation I wrote, that in subsequent years, has been performed for more than 25,000 students.

I had to visit here.

I had to witness it with my own eyes. 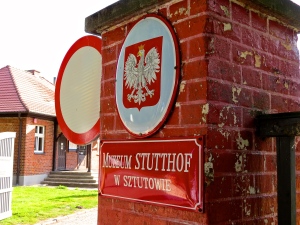 Entrance to the Stutthof Museum.

Michael was able to arrange a private tour to the Stutthof Museum through our travel agent way in advance of our trip. On past Regent cruises, it had been offered as an excursion but it was not on the itinerary for our cruise. Our travel agent, Judy Perl, whose family was also on the cruise, thought the prospect of going would be a good experience and asked if we minded if her family joined us. We readily accepted. So that morning, our party of seven, boarded a mini bus for Stutthof.

(A side note: The tour to Stutthof was later offered to our fellow cruisers as a late add-on and they ended up with five full buses!)

Outside the Stutthof Concentration Camp.

In 1939, the Stutthof Concentration Camp was built in the former Free City of Danzig territory, 34 km (21 miles) from Danzig (now, Gdansk). It is now known as the Stutthof Museum or Muzeum Stutthof w Sztutowie.

Stutthof was the first camp built outside of German borders and was the last camp to be liberated in May 1945.

It was originally intended to house Polish undesirables as an internment camp but in 1941 became a labor camp. In early 1942 it became a concentration camp. It is believed that approximately 110,000 Poles and Jews from all over Europe were sent here. The crematory and gas chamber were built in 1943, used primarily to execute patriotic Poles. In June 1944, they were used for Jewish executions as part of Hitler’s Final Solution.

The building where new arrivals were processed.

The original, old camp had only eight barracks but was then expanded with many more barracks as part of the new camp. Surviving documents show people from at least 28 countries were imprisoned here. Outside of the Stutthof facility, there were 39 sub-camps scattered throughout Poland.

Men, women and children lost their lives here. It is estimated that more than 85,000 people were either shot, hung, gassed or died of malnutrition and disease here. In 1945, of the 50,000 remaining prisoners in the Stutthof camp system, half of them died. 5,000 died on a death march to the Baltic Sea, where they were forced into the water and machine-gunned. 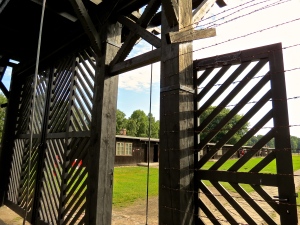 Known as the Death Gate, this is the prisoners entrance to the camp.

When we arrived at Stutthof, we stood for a long time inside the main gate near the SS headquarters just outside the camp itself which was completely surrounded by barbed wire. Quite frankly, I tuned out most of what our tour guide was saying, lost in my own thoughts. Most of the information she was relaying to us, I had heard before– this was a deeply, personal experience for me.

The camp and the museum exhibits are quite sterile. By that, I mean there is nothing displayed in an effort to encourage emotion. Still, I couldn’t help but shudder when I walked through the Death Gate, past the barbed wire and into the camp. 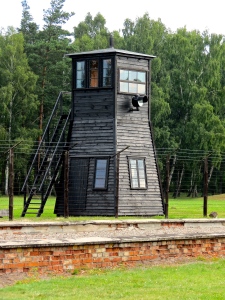 One of the guard towers standing watch over the camp.

My head was full of the atrocities that took place here. The horrifying conditions, the torture… they even experimented with making human soap from the victims’ remains.

Some of the barracks still stand. Guard Towers surround the camp, assuring that no prisoners could have escaped. In the center of the large fenced yard are the crumbling foundations of the workhouses. Of course, much of the camp was destroyed as the Allied troops approached, in an effort to eliminate any evidence of what occurred here.

At the far end of the camp stands the gas chamber and crematory. I couldn’t believe how incredibly small the gas chamber was… the interior, possible 12 feet by 20 feet at the most.

In the distance stands the gas chamber and crematory.

The gas chamber at Stutthof.

In the corner, a marker and replicated gallows stand where hangings took place. It stands very near an old wooden gate crossing train tracks that brought in cattle cars full of prisoners.

The location of the new camp at Stutthof.

Barrack markers for the new camp.

Outside the old camp, the location of the new camp barracks is memorialized with large white stone markers.

The majority of the camp is a wide open field, scattered with what remains from this defining moment in history.

I’ll let the rest of the pictures speak for themselves.

I will never forget this day.

A prisoner’s uniform on display. 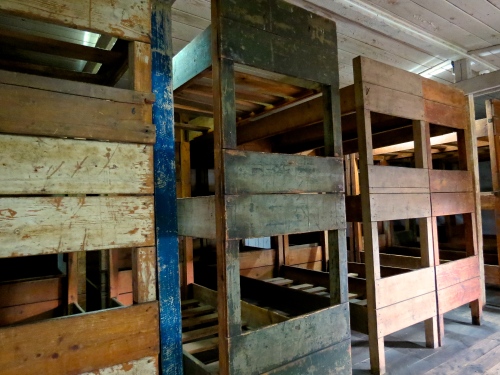 Rows of bunks crammed into the barracks. Many prisoners were forced to sleep on top of each other on the floor.

A toilet inside one of the barracks.

Scratchings by prisoners on one of the posts inside the barracks.

The crumbling foundation of one of the workhouses. 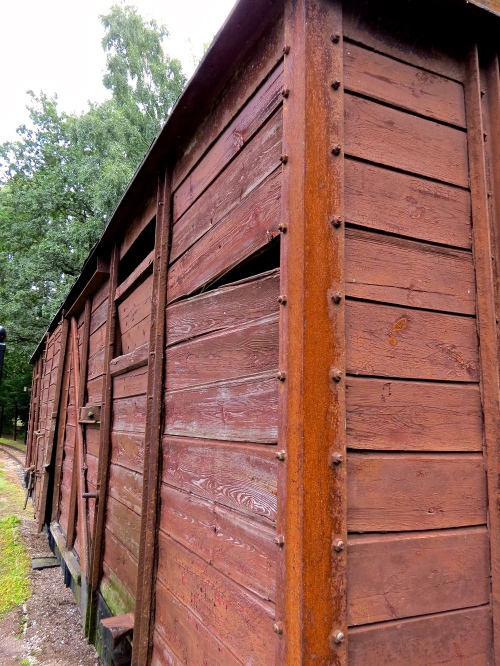 Cattle cars were used to transport prisoners into the camp. 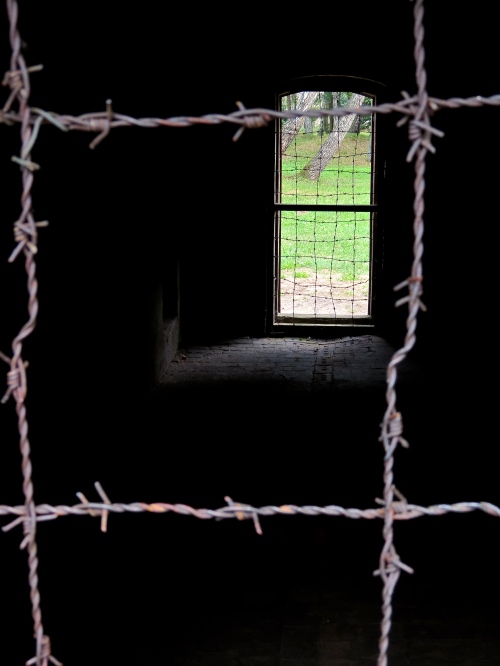 Looking inside the gas chamber.

Looking up at a guard tower.

Outside the old camp, looking in from the new camp.

Standing outside the Death Gate at Stutthof Concentration Camp.