Monday was the first nice day this year, where it was actually warm enough to sit out on the front porch and enjoy a cup of coffee without shivering between sips. I can’t recall, specifically, what I was daydreaming about— but my thoughts were suddenly interrupted when out of the corner of my eye, the sight of a light blue balloon drifting across the front yard came into view.

It was hovering for the most part, about a foot or two above the ground, dragging its fresh and clean, matching blue ribbon behind it. It would pause momentarily, the ribbon appearing to latch on to anything in its path— but then the balloon would tug at the ribbon and it would resume its journey.

When it reached the sidewalk that runs from the porch to the front gate, it suddenly lifted up, dancing its way through the branches of the lilacs that border the path, about ten feet in the air. By this point, I was thoroughly mesmerized and couldn’t help wondering where it was going and where it had been.

Did it escape from some unlucky child’s birthday party? A child, sheepishly letting go of the ribbon under the disapproving glare of their parents— Who, minutes before had told them not to let go?

Was it tied to a sign, alerting passersby of some impending open house or sale? Bored by the inactivity, did it tear itself free with the first convenient gust of wind that came to its rescue?

Had it drifted down, sorrowfully, from someone’s memorial balloon release? After climbing high in the sky, helping some poor mourning soul release some of their pent-up grief— it drifted far out of sight and had started its own descent in search of a final resting place? 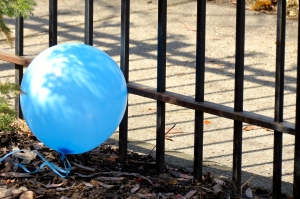 Whatever had been its original, intended purpose, it had suddenly assumed a life of its own and become a part of mine.

As I followed it, I found myself getting very philosophical. My head filled with metaphors… all because of this silly blue balloon.

Like this balloon, people drift in and out of our lives. Some stay for a while, becoming friends or co-workers, while other simply pass through hardly noticed. This is not to say that there is not always some impact, great or small.

Some of us find ourselves wandering, searching, exploring life– propelled by the winds of change, adapting to our surrounding, then moving on until we find the place we belong.

After a while, the balloon ended up being trapped between the front shrubs and our fences. The wind was picking up and the temperature was starting to drop. The balloon started to deflate and was forced to roll about, back and forth, trapped in the narrow path between the shrubs and fence. The ribbon continued to wrap around rocks and twigs, holding on as long as it could, until the wind would once again give the balloon the momentum to break free.

I went back to my tasks, for a time— but then later, went back out to check on the blue balloon. It had somehow freed itself from its spot and was all the way across the yard to the west. I’m not sure how it got there but it was now dirtied and shriveled, appearing to finally be at the end of its journey.

It got dark, I forgot about the blue balloon and life went on.

When the sun came up Tuesday morning, I thought to look for it again. I went to where I last saw it, looked all around, but it was gone. I had thought its life was over— I was wrong. It journeyed on.

I’ll let you fill in the metaphors here.

By jlinamen1229 in education, Lifestyle, Personal Growth, Uncategorized on April 2, 2014.
← My Technology Challenge: Storing Media A Healthy Lifestyle: What You Eat Is Probably Killing You →