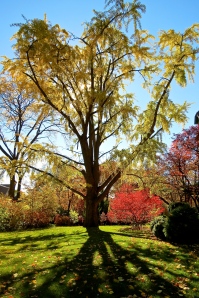 Our Ginkgo tree at 321 Division Street.

One of the priceless gems of our property at 321 Division Street is our ancient Ginkgo tree. I know it’s definitely over 100 years old (based on an old picture) and would guess it’s actually between 110 and 130 years old. The modern Ginkgo tree is often called a living fossil, a descendent of the species dating back to the Early Jurassic period.

It is well known for its fan-shaped leaves that can be frequently found in ancient Chinese art.

In the fall, I’ve watched all the leaves drop from the tree in one day. When it happens that quickly, it’s a spectacular sight. The species is known to commonly drop all its leaves in 1 to 15 days.

This year, our tree is acquiring much more of the deep golden color leaves than usual. In recent years, we’ve had warmer weather leading up to a hard frost that causes most of the leaves to drop still green. 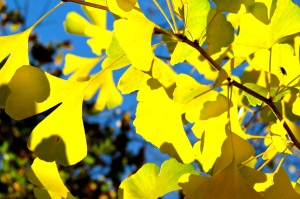 The Ginkgo, or Ginkgo biloba tree, grows tall before its branch stretch out wide. Our tree is somewhere around 70 feet tall. The Ginkgo is known to easily reach heights of over 100 feet.

Ginkgo trees are either male or female; the male producing cones with spores that are highly allergenic. The female produces ovules and once pollinated develop into silver green fruit that turn orange when they are ripe. There is a large nut in the center of the fleshy fruit. Ginkgo trees can reproduce asexually as well, which is evidenced by our tree. The nearest mature Ginkgo tree is a block away and is female. We believe it to be an offspring of our tree. 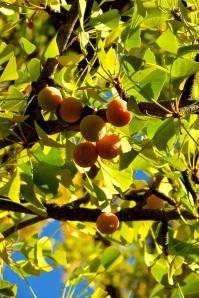 Clusters of Ginkgo fruit ripen on the tree.

The biggest drawback about our tree is the fruit. Our Ginkgo produces large quantities (hundreds of pounds) of fruit each year, The fruit  is smaller than a walnut.) Though a few do drop throughout the fall, most remain on the branches long after all the leaves have dropped and we’ve had several good freezes.

The fleshy fruit contain butyric acid, that when ripe and fallen, have a foul smell like vomit. On an unseasonably warm day, this smell can be detected over a block away. This odor only lasts a few days but because the fruit usually drop so late, we often have fruit under fallen snow and have to deal the the smell briefly in the spring as well.

Once established, the Ginkgo tree is quite hardy and resistant to disease and pollution. They do not survive (tolerate) shade though. An interesting fact I found was that six Ginkgo trees survived the Hiroshima atomic bomb (1945) when most every other living thing perished.

Our own tree sustained substantial damage as the result of  bad hail storm a number of years ago, losing nearly a quarter of its branches. We had an arborist come and prune the damaged wood and the tree remains healthy. He also researched and believes it to be one of the three largest Ginkgo trees in Illinois.

In some cultures, Ginkgo is used in cooking or as a featured ingredient or dessert.

Several years ago, it was one of the most widely-popular dietary supplements on the market. Ginkgo biloba was sold to millions, promising great memory enhancement among other things. In fact, this is completely false. Though a few smaller studies reportedly show benefits in dementia and Alzheimer patients, most studies show no slowing or improvement with consumption. There have been no proven beneficial uses for Ginkgo in other touted areas either, such as lowering blood pressure .

There are also many dangers to ingestion and regular Ginkgo use in some people. Many people are highly allergic. Ginkgo has been studied and shown to be detrimental to some people’s health. Specifically, taking Ginkgo supplements can be harmful to people with blood circulation problems, pregnant women and people taking antidepressants.

In addition, the over consumption of the seed (meat) can cause poisoning and convulsions. Some people are allergic to just handling the fleshy fruit, much like poison ivy.

So as a general warning, never start a regiment of dietary supplements without investigating them first. Most of the advertised new wonder drugs are marketing scams claiming unproven scientific results. Read the labels, ask your doctor and research online before taking a risk. 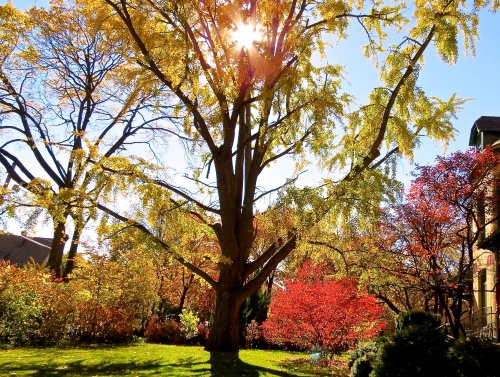 By jlinamen1229 in Eco Friendly, Health, Lifestyle, Nature, Uncategorized on October 29, 2014.
← When October Goes It’s Beginning To Look A lot Like…. →