I’ve spent so much time focusing on our Boxers, Cash and particularly, Belle lately; I figured Collins needed some public attention.

Collins, named after Tom Collins in Rent,  is probably the friendliest cats I’ve ever known. He’s even friendly without reservation, with strangers. He will make himself scarce at parties though, usually, to reappear as it starts to wind down to check things out. 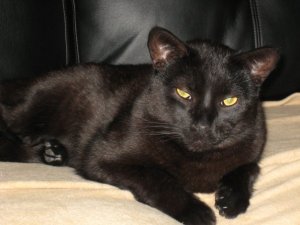 Collins is a huge talker. He will Meooooow and Grrrreooooow continuously if he wants attention. Sometimes he’ll follow me around the house talking to me, especially if I haven’t spent time with him on my lap first thing in the morning. He’ll rub up against me or whatever is nearby (the sign of marking his territory) and a few quick pets or strokes are never enough.

He greets me every morning and follows me, talking to me non-stop, while I make coffee and every night, follows me, meowing, all the way up the stairs.

Collins loves to sit on my lap and nuzzle and purr, or snuggled against my side. His purring can be quite loud at times. His desired daily routine seems to be starting and ending the day on, or next to me. The rest of the day he could be anywhere in the house. He just wants his me time.

He loves to give kisses. Cats usually kiss by nose or forehead bumping but Collins prefers to lick my lips. I know, some people will think that’s gross but my dogs do the same thing too… and I kiss them back.

We keep food out for him at all times, refilling his bowl as needed. One of Collins’ funny little traits is that he likes to have his food fluffed. That’s right, sometimes he’ll find me and talk until I follow him to his food bowl. I either shake it or stir the pieces of dry kibble up with my fingers… and he  prefers it to be in a mound. As soon as I do that, he’ll stop his chatter, often only eating a piece or two and then jumping back down and he’s off on his own.

I made the mistake of letting him try people food. Well, some he he tried himself. He likes– wait, he loves whipped cream, ice cream, chicken, hamburger and melted cheese. I can’t eat any of them without Collins begging; talking and talking until he gets a taste. Oddly though, he will not eat wet or moist cat food or treats, only dry.

I’ve never heard him howl or yowl, like some cats, even when Belle is pursuing him.

I caught several programs on Animal Planet this weekend dealing with rescues and socializing animals and realized I’d never really looked into cat language or cat talk in all the years I’ve had them.

I guess I’ve always just taken their form of communication for granted.

I learned that you really have to watch their full body language to gauge how they are feeling.

What made me especially curious was how Collins and Belle interact. At first, I worried that they often look like they were fighting. (Actually, Belle taunting and teasing Collins and him defending himself.) But, after doing some research, I’ve come to the conclusion that they are mostly just playing and getting to know each other. 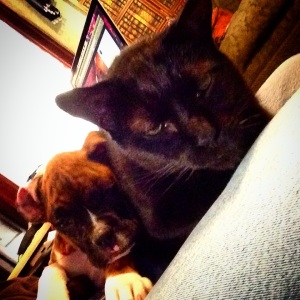 When Belle approaches Collins calm and gentle, Collins will poke his head forward and bump (kiss) Belle on the nose. When Belle is all wound up, Collins usually still lets her sniff, no matter what Belle’s energy level is at the moment. If Belle starts bouncing or making short lunges or boxing him, Collins will usually give her a drawn out meoooooow, a hiss or bat (box) back at her.

According to the different sites I checked out, Collins doesn’t exhibit the typical behavior of a cat in fear or annoyance. I try to watch his body language and he may exhibit one or two traits– but not multiple signs of fear or aggression.

Though Collins frequently uses his tail language to express happiness or contentment, and occasionally (with me) irritation; he seldom uses it at all to show irritation with Belle.

Same with his ears. Cats use them to show fear, aggression, pleasure and curiosity. When they feel threatened or in defense mode, cats will often flatten there ears or pull them back against their head. I’ve seen Collins do this before but not in recent memory and not with Belle.

When he’s in the mood to play, Collins loves to hide and jump out and bat at Belle. Then he usually retreats because he knows after the initial surprise, Belle will be on his tail… or sometimes his back. Several times in the past week, Belle will stalk Collins and then trap him; laying right down on him. It’s really funny to watch as Collins meows and wriggles out from under her. 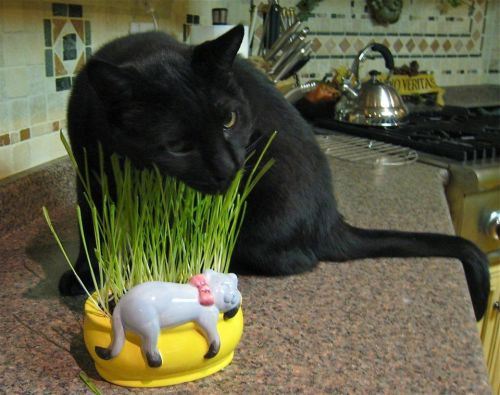 Collins chowing down on chia grass.

You know the saying goes, Some things are just meant to be. The same is true with Collins. He adopted us, out of the blue one December. He wandered into our yard that day and didn’t leave, so we finally brought him in out of the cold.

Whether any of the rest of us accept it or not– Collins is the king of this house.

Don’t believe me? Ask him— He’ll be happy to talk about it for hours.

By jlinamen1229 in education, Family, Lifestyle, Pet Talk on November 4, 2014.
← Public Education Is ‘Dumbing Down’ America Give Me A Freak →