Home » Lifestyle » So You Think You Can Drive!?!

So You Think You Can Drive!?!

No, I hate other people driving.

Does anyone take a driving test anymore?

I’m that person that screams when they drive. I swear, I can’t even drive around the block without some idiot pissing me off.

So, I’ve decided I need to pitch my idea for a new TV show to the networks. So You Think You Can Drive is sure to be the next big thing.

It’s another reality-competition show BUT no gets eliminated each week. Instead, competing drivers will square-off in a difficult, new challenge in each episode and be ranked based on their performance.

The catch is…. they’re really competing for the title of World’s Worst Driver.

The challenges will include some pretty daunting tasks. Like– driving the speed limit. Using a turn signal. Driving the right direction on a one-way street. My favorite is, of course, the most difficult… Driving one full mile without texting, talking on the phone, eating, putting on make up or — and this is the most challenging…. reaching down to feel around for that thing that just fell on the floor.

I think it will be an epic hit! 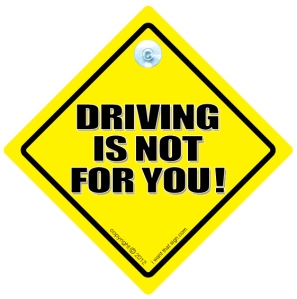 Of course all the stereotypes will be represented: Old lady that never drives over 10 mph, Drunk guy, Texting teen, Revoked license guy, Girl that’s always late for work, Bus driver on a controlled substance, Clueless singing preppie, Woman with too many kids in the car, I break at every street sign person and I break for wind man.

The show will be interactive, so viewers can tweet live comments on air, most of which will have to be censored; mirroring what they’d be saying if they were following the competitors on the open road.

I think viewers will vote too. The winner will have their car crushed by one of those big compactors, their license revoked by a real (retired) police officer and they’ll get a permanent tattoo on their forehead (preferably with a rusty needle) of World’s Worst Driver.

It will be bigger than Honey Boo Boo….

That is, before the child molester-thing.