In August 2013, I visited Berlin and the Museum Stutthof (Stutthof Concentration Camp) near Gdansk in Poland. For me, it was an emotional journey in remembrance of horrible atrocities that occurred in the world, long before I was born. As I started reading the novel, The Children’s Train, I had images come to life, enhanced by places I had visited. I thought I’d share some of the pictures I took, along with my review of Jana Zinser’s captivating new book.

The train gate at Museum Stutthof, Poland, where prisoners where brought into the camp. August 2013.

It has been estimated that from 1938 to 1940, the Kindertransport spared the lives of 10,000 children from almost certain death at the hands of the Nazis. Most of those children, from infant to age 17, were the only members of their families to survive the brutality of World War II. Parents desperate to protect their children, handed them over to strangers to be boarded on trains that would take them to safety.

This is the beginning premise of Jana Zinser’s fictional, The Children’s Train, A Novel to be released by BQB Publishing on October 26, 2015.

Zinser has written a heart-wrenching, epic story that follows lives of several children that survived  (as well as the fates of their families); from the beginning occupation through the end of the war.

Zinser takes readers from escape of occupied territories, into hiding, to safety, the concentration camps; and then back undercover behind enemy lines.

Here’s the description from the publisher:

In November 1938 on The Night of the Broken Glass, the Jewish people of Germany are terrified as Hitler’s men shatter their store windows, steal and destroy their belongings, and arrest many Jewish fathers and brothers. Parents fear for their own lives but their focus is on protecting their children. When England arranges to take the children out of Germany by train, the Kindertransport is organized and parents scramble to get places on the trains for their young family members, worried about what the future will hold. Soon, trains filled with Jewish children escaping the Nazis chug over the border into Holland, where they are ferried across the English Channel to England and to freedom. But for Peter, the shy violin player, his sister Becca, and his friends Stephen and Hans, life in England holds challenges as well. Peter’s friend Eva, who did not get a seat on the Kindertransport, is left to the evil plans of Hitler. Peter, working his musician’s hands raw at a farm in Coventry, wonders if they should have stayed and fought back instead of escaping. When the Coventry farm is bombed and Nazis have reached England, Peter feels he has nothing left. He decides it’s time to stand and fight Hitler. Peter returns to Germany to join the Jewish underground resistance, search for the mother and sister he left behind in Berlin, and rescue his childhood friend Eva.

It’s a story of fear, torture, loss, hope, freedom, survival and most important of all– it’s a story of heroism of epic proportions.

A freight car like those used to transport 80-100 prisoners, per car, to the concentration camps. (At Museum Stutthof.)

As someone that has had an ongoing interest in Holocaust studies and education, what I really like about The Children’s Train is that this novel gives the reader an in depth look; both in varying viewpoints and through a broad scope of experiences, making it a perfect introductory-look into the history of the Holocaust. It is thoroughly engaging from start to finish. After reading, you not only have a better picture of the many devastating situations endured by Holocaust victims and survivors; you also have a clearer understanding of Nazi and German (not mutually inclusive) people’s positions and actions. Yes, some believed in Hitler’s plan of hate. Others acted based on financial reasoning and many more out of fear.

The subject matter may be a little heavy for young readers but I’d certainly recommend it for high school through adults. Zinser tells the story simply, without over-dramatizing or trying to be graphically-shocking. By the very nature of the events, even through the author’s delicate handling, it might be too overwhelming for younger children.

The young lives of Peter, Eva and all the others will tug at your heart and inspire you. You’ll discover hope in humanity though quiet, unassuming acts of courage and heroism; and mourn the lives of those that were lost.

Though 10,000 children may have been spared by the Kindertransport; 6 million Jews lost their lives at the hands of the Nazis — many of them children. This is their unforgettable story. 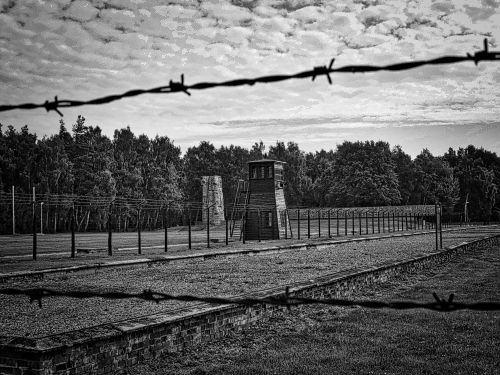 Children not lucky enough to escape on the Kindertransport, were forced into concentration camps like Stutthof, where many of them died. (At Museum Stutthof, August 2013.)

I received an ARC of The Children’s Train, A Novel through NetGalley.

By jlinamen1229 in Book Review, education, Family, Uncategorized on August 4, 2015.
← No Money Blues or Ruse? Afternoon At The Fen →