There are still more good days than bad. There are even some real great days– but nothing makes me sad like when Cash is having a bad day. 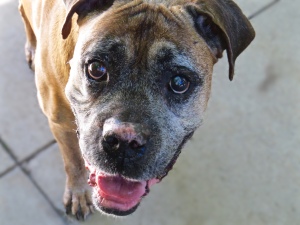 At 12 and 1/2, Cash is still mighty healthy for a Boxer, his age. Of course, he’s not as active as he once was- he’s slimmed down and sleeps more than he’s awake. Yet, true to the breed, he still has those ‘puppy moments’ that never cease to make me smile.

Some days his legs don’t work so good. When Belle, our 1 year old Boxer, is overly playful; I sometimes have to play go-between. Even when Cash is in the mood to play, it’s still really easy for Belle to knock him on his butt. I don’t know what’s going through his head but he seems surprised, even a little embarrassed when it happens.

Sunday, 10/11/15 – Today was a good day. Yesterday felt like a really bad one. Cash had four pretty severe attacks of “reverse-sneezing” that I witnessed. There may have been more. At least I know now what it is. Knowing it’s not life-threatening doesn’t make the experience any easier. Especially when he’s gasping for breath, looking in your eyes. It’s heart-wrenching.

Just Breathe. A reverse sneeze isn’t actually that at all. I’m not sure how that term came about; but I can assure you that if you haven’t experienced it, witnessing it is far worse than is sounds. The medical term is paroxysmal respiration. When this happens, it is your dog trying to rapidly pull air into his nose. It sounds like something might be caught in his nose or throat and he’ll usually extend his neck and all his focus goes into trying to breath.

In everything I’ve read, doctors aren’t sure what the root cause is; but they suspect it could be allergy related and there is no treatment. These attacks also cause no ill or long term effects. Most often they can be brought on by stress or excitement or can happen when eating or drinking. These episodes can last from a few seconds up to a minute. Dogs act perfectly normal before and after it occurs.

The first couple times Cash had one of these attacks, I was afraid I was on the verge of losing him. It literally sounds like he’s choking or being strangled; wheezing and gasping for air.

I learned the best thing you can do is to keep your dog calm and gently rub his throat or briefly cover his nose to encourage him to swallow. This helps open the air passage and allows normal breathing to return. 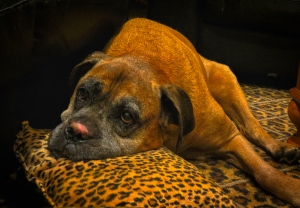 Tired Legs. A couple weeks ago, while Belle and Dudley were away on a play day, Cash was having a weaker moment. I could see his legs were a little more stiff than usual but he was still managing to get around just fine. We went out side for awhile and when it came time to go back in, he just froze on the steps. Legs trembling, he stood there staring at me– waiting. So I scooped him up, all 80 plus pounds of him and carried him inside; for which he seemed grateful. A couple hours later, he was doing the stairs again like a champ.

I don’t pretend or assume I know what he’s feeling and I try not to act overly concerned– but I am. It’s funny, sometimes– trying to hide your feelings from your dog. But he knows. Most people don’t realize just how synced their pets are to their emotions.

Just like with people, there are good days and bad days. Aging is difficult for us all. The most important thing is to cherish every moment.

Wednesday, 10/14/15 – 4 am- Three days have gone by without another serious attack. For that I’m grateful. Hoping today will be another good day. My boy deserves it.