I’ve talked a lot here and on social media about our dogs but there’s another member of our family that isn’t mentioned much. Our crazy, black cat, Collins. 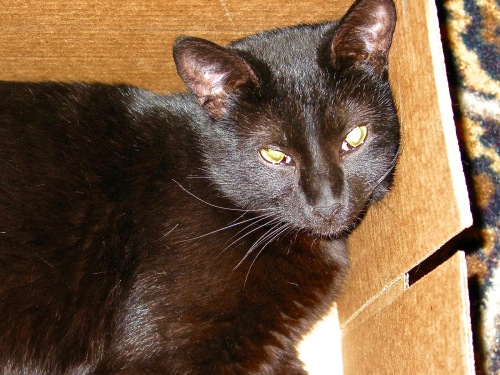 So why an unbirthday? That’s because we don’t know exactly when his birthday is, or even how old he actually is.

Here’s the story: It was ten years ago, in 2006, about a week before we were supposed to leave for Christmas in New York City. I was putting garland and bows up on the fence around our property and I happened to glance down and see this black cat watching me. I spoke to him and he meowed back at me. It was the beginning of a conversation that hasn’t stopped.

The next thing I knew, he was purring and rubbing against my leg. I petted him and told him to go home but he proceeded to follow and talk to me. This went on for a couple of hours. He followed me completely around the fence and then into the yard.

Over the years, we’ve seen many feral cats in our neighborhood and not one has ever approached us– let alone let us pet them. He obviously belonged to someone and must have either gotten out or was abandoned.

I finished what I was doing, told him to go home again and went in the house. I checked again later, before letting the dogs out but he was no where to be seen. I just figured he wandered home. Actually, he was still there but he was smart enough to hide. He was here and he wasn’t leaving.

A little later I went out and he came running down our back stairs, purring and meowing for attention. Concerned he hadn’t eaten recently, I put out some wet cat food for him but he wasn’t interested. So I still figured he was just visiting. (He must be eating somewhere!)

This became a pattern over several days. He was always there. He’d see us coming or going and as long as the dogs weren’t around, he’d follow us. If we went in the house, he’d sit in the driveway and wait.

I tried not to give him too much attention because I get attached too easily and he was just too friendly to be a stray. Still– worried he hadn’t eaten, I tried putting out some dry food and he devoured it in minutes. (He’s a finicky eater! He will not eat wet cat food.)

We felt like we had to do something. He wasn’t leaving…. and we couldn’t stop worrying about him.

Michael happened to mention the situation to our friend Tony, at work. Tony happened to be considering the idea of getting a cat but he thought he have might have allergy issues. Michael told Tony we hated that we were leaving town– and worried about leaving him all that time in the snow and the cold. (Nasty weather was in the forecast.) Tony said he’d take him (on a trial basis) and at least he’d be safe.

For us, that was a relief. While we were gone, Tony took him to the vet and had him checked out. The vet guessed he was probably about three years old and was perfectly healthy. He also suggested that he should be neutered. So Tony took care of it all but his allergies were bothering him and he didn’t feel like he was going to be able to keep him.

That’s the story. When we got home, Tony brought him back to us and we had a new member of the family.

We had been adopted.

We named Collins after the character Tom Collins in the musical RENT.

For anyone wondering, we did check the available resources at the time to make sure whether anyone was looking for him or not.

Collins always seems to get along with the other kids just find. Except, dogs play a little too rough so Collins always knows when to make himself scarce. 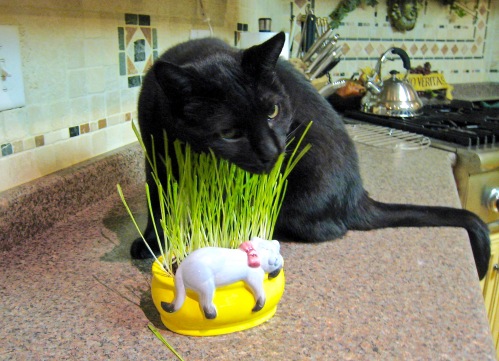 Collins got Chia grass for Christmas (2011) and it was the first (and only) time he jumped up on the kitchen counter.

Some Collins facts/highlights from the past ten years:

I better finish this up– he’s on my lap and pawing my face because I’m not looking at him enough. That, and he keeps covering my computer keys with his paws and tail.