My admission ticket to the Hermitage.

Last day in Saint Petersburg, Russia and we’d be spending it on two more excursions, “The Hermitage: A Wealth of Art and History” and “Canal Cruise and Shopping“. What a beautiful city!

The Hermitage or State Hermitage,  is one of the largest and oldest museum collections in the world. The complex that houses it is made up of six buildings including the Winter Palace, the former main living quarters of the Russian tsars. Catherine the Great started the collection in the late 1700s but it wasn’t open to public until the mid-1800s. 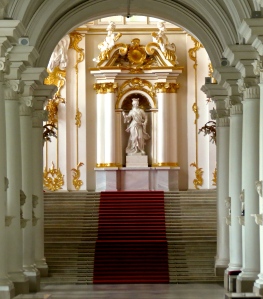 We viewed works by Michelangelo, Da Vinci, Monet and Picasso to name a few. I recognized several pieces I’d seen in books or as reproductions over the years and found myself drawn to the larger murals and sculptures the most. 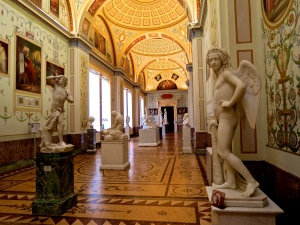 A sculpture wing in the hermitage.

I think overall, I was as intrigued and impressed by the Hermitage architecture and the layout of the gallery displays as I was the actual art collection itself. We viewed room after room of gorgeous, grand halls beautifully restored and elegantly decorated with art by the Masters. Too much to see in a short period of time.

At one point on the tour, we were passed by workers pushing two carts of painting through the halls. The paintings were unprotected, bouncing and rubbing against each other and I was a little shocked that greater care wasn’t being taken with the priceless art.

Priceless beauty of the Hermitage.

Once the museum opened to the public for the day, we could barely move. The line outside to get in was ridiculously long as well.

My favorite gallery space in the Hermitage.

I love the almost ghostly, figure towards the end of the hallway. 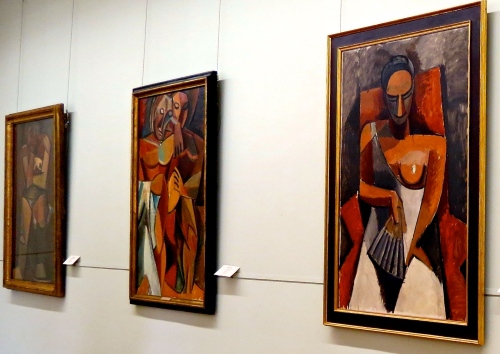 I love this painting.

That afternoon, we met for our canal cruise and shopping. It was a little overcast so we took umbrellas, just in case. Our guide took us shopping first.

Our bus pulled up to the equivalent of a strip mall and our guide, Alexey, told us what store we were going to shop. Now I realize that many people have different interpretations of shopping but let’s be real here. Michael and I assumed we’d be going to an open air market or shopping district that would have, among other things, souvenirs. Others on our tour thought we’d be going to a street with designer shops. We were all wrong.

The shop we entered was basically a small overpriced souvenir warehouse that was laid out like a small American dollar store. I was only interested in purchasing matryoshka (nesting dolls) and maybe a t shirt. Well, they had one small rack of ugly, cheap looking t shirts (for around $30 USD a piece) but they had lots of nesting dolls. Only they were marked up about 400% to 1000% in price. So shopping was a joke. We were there quite a while, most of the women on our bus bought something, while most of the men stood outside the bus shaking their heads. For a moment, I thought I was back in America.

Along the canal in Saint Petersburg.

The weather cooperated as we boarded our small boat for the canal cruise. Just in case, the boat had an open, upper deck and an enclosed lower deck if it rained. Michael and I sat in the back of the upper deck and I was on a raised storage box that doubled as a seat, so I could take pictures. I literally had to duck every time we went under one of the many bridges we passed under.

There was a nice breeze and it was a relaxing ride. I loved seeing the city from this different perspective.

Russian workers taking a break along the canal.

I have to say something about our guide, Alexey. He was a young, tall, skinny guy, probably in his 20s and he spoke with this sort of Russian-French dialect. Michael refers to him as Pepe le Pew. Alexey spoke with a very breathy voice and ended each phase with a breathy chuckle or laugh.  This was our second tour with him, so we knew what to expect. It was funny to watch all the first-timers’ heads turn, open jawed and bewildered as he started this second tour. He certainly entertained us. Michael and I still find ourselves imitating him, randomly, to make each other laugh.

On the canal in Saint Petersburg, Russia. 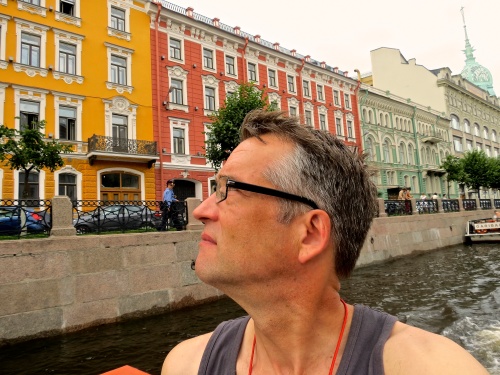 Taking in our last glimpse of Saint Petersburg.

After the canal cruise, it was back on the bus, crossing through passport control one last time, saying proshchaniye (farewell) to Saint Petersburg.