We started the day with breakfast in the Chamber Club at our hotel, fueling up for our biggest sightseeing day in London.

London Hop On Hop Off Bus. (Golden Tours) With limited time to take in this amazing city, we looked forward to the HOHO bus as a quick way to see the major sights. (One Day Unlimited use was included with our London Pass.) There are four routes (with a lot of overlap) and we chose The Grand Tour.

Crossing the Tower Bridge on a HOHO bus.

I’d rename this The Grand Bore. Besides the fact that traffic was at a standstill most of the time; many of the major sights of London were hidden from view or around the corner from the bus route. When we did reach a landmark that we could see…. the bus often rushed by so fast it was hard to even snap a picture. A huge disappointment!

We’ve really enjoyed the HOHO buses in Chicago, NYC and Singapore. Unless you are using the bus as your transportation to get off at each stop in London, I wouldn’t recommend it. Even then, you are bound by the bus schedule which could have you waiting and losing more valuable time. Unlike the other cities I mentioned, there wasn’t the same satisfactory ‘city tour’ overview (riding the whole route as a tour) we experienced in the past.  Plus, the tour narration (prerecorded, available in different languages) often didn’t sync up and restarted segments frequently.

There was one perk.  That was crossing the Tower Bridge on an open top bus. I found that pretty thrilling.

We were only about halfway through the route when we decided we were wasting valuable time, so we got off at Hyde Park and took to the street.

A distant view of Trafalgar Square.

The Oyster Card. Before I launch into all the ground we covered today, I wanted to mention how easy the Oyster Card is to use. You scan/tap/swipe your card each time you start and stop travel whether it be the Tube (Underground), bus, train, etc. There are caps on the charges per day depending on the distance and zones you travel. So jumping on and off public transportation doesn’t have to be so expensive and is a fast, convenient way to get around the city.

We ordered our cards several months before our trip, already loaded with a balance so they were ready to go when we arrived. (Each person must have their own card.) You can reload them or cash them out at many stations but there is often a line. You need this card if you intend to use public transportation.

Hyde Park. One of the largest parks- 350 acres, Hyde Park is one of the Royal Parks. It’s often compared to Central Park in NYC, of course, they are quite different. One of the first spots we encountered was the Italian Gardens. A lovely, formal setting with fountains and statuary. We got a cup of coffee at the nearby pavilion and enjoyed this peaceful setting. 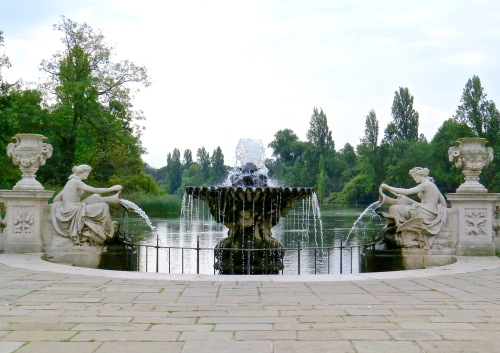 In the Italian Gardens of Hyde Park.

Moving on through the park to Kensington Gardens we happened to find the bronze Peter Pan statue, paying tribute to J.M. Barrie’s immortal character. Barrie lived close to these gardens and drew upon them for inspiration.

Kensington Palace was next on our walk, currently the home of many Royals (include both Prince and William and Prince Harry) in different wings of the estate. Portions of the Palace are currently closed for renovation. With limited time, we had not planned to tour the interior of the Palace.

Kensington Palace from the gardens.

We continued our walk toward Royal Albert Hall and the massive Albert Memorial commemorating the death of Prince Albert at the early age of 42. The memorial was designed by George Gilbert Scott, who was also the architect of our hotel.

The London neighborhood of Queen’s Gate.

Queen’s Gate. At this point, we left Kensington Gardens and headed to Michael’s old stomping ground in the Queen’s Gate neighborhood. Michael lived in London for six months while completing a college internship with the BBC in 1986… 30 years ago.

Michael found his old apartment building in this quiet, classic neighborhood and enjoyed reminiscing over fond memories. Including something about a fire and breaking a window. (Oops!)

Michael on the porch of his old apartment building in Queen’s Gate.

Michael’s apartment was just around the corner from the British Natural History Museum, designed by Alfred Waterhouse in the Victorian Gothic Revival style of architecture. We didn’t have a lot of time but we did run in and check out the massive lobby and first floor exhibits. NOTE: Most of the major museums in London are free to the public (with a suggested donation encouraged.) 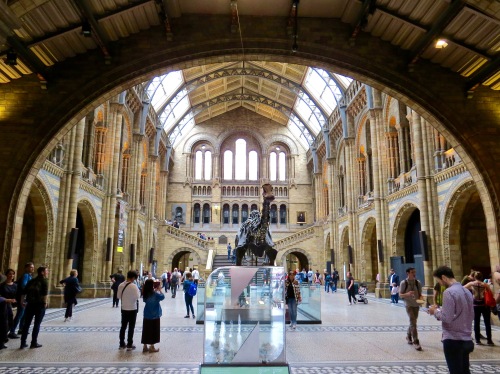 The grand entry of the Natural History Museum.

Trying to see as much as possible in a city with so much to offer is a daunting task. We knew we wouldn’t have a lot of time to spend in London’s many wonderful museums. I researched many of them ahead of time and chose a couple I hoped to visit.

The Victoria and Albert Museum featuring art and design.

The Victoria and Albert Museum. I’m glad we selected V & A, featuring a tremendous collection based on art and design. The museum provides excellent temporary exhibitions in addition to the permanent collection. One of the reasons we chose this over other museums was the smaller size (comparatively speaking) and the ambiance– based on the way the collections were displayed. When done well, the space itself becomes art, with each installation becoming part of of the whole.

Entering the museum, you are welcomed in the rotunda by a stunning, modern chandelier by Dale Chihuly. It was first installed in 1999 but expanded and enlarged by the artist in 2001 to its current size.

The Dale Chihuly chandelier in the rotunda. 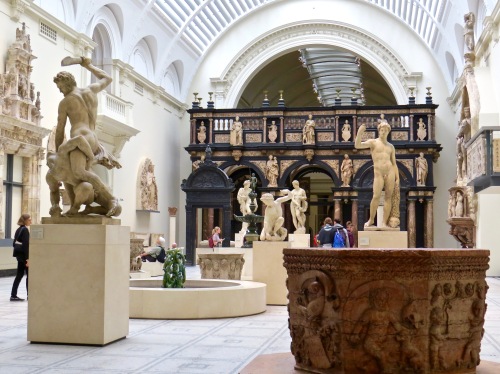 Beautifully displayed art in in the Victoria and Albert Museum.

After walking through much of the museum, we had Cream Tea ( tea and scones, complimentary with the London Pass) at the cafe across the courtyard from the main museum building. We could have easily spent several more hours here but we needed to move on. I’m sure we’ll return in the future.

Harrods. Since we were in the neighborhood, we made a brief stop at the world-famous department store, Harrods. Just walking through the jewelry and perfume sections was mind-boggling. Michael purchased his hard-to-find cologne and then we moved through the gourmet food section– quickly— exiting before our stomachs could start rumbling. (I’m glad we just had that scone!) 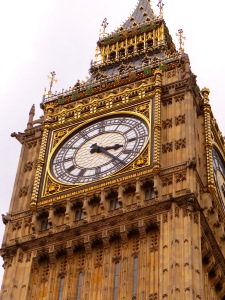 The clock of Elizabeth Tower that houses Big Ben.

Palace of Westminster. We took the Tube to Westminster for a closer look at the Houses of Parliament and Elizabeth Tower, most commonly referred to as Big Ben.

Big Ben is actually the nickname of the bell in the tower. The official name of the tower was Clock Tower until it was renamed in 2012 in honor of the Queen’s Diamond Jubilee.

Westminster Abbey is just west of the Palace and is most notable as the place of coronations and the burial site of British monarchs.

The Palace of Westminster. 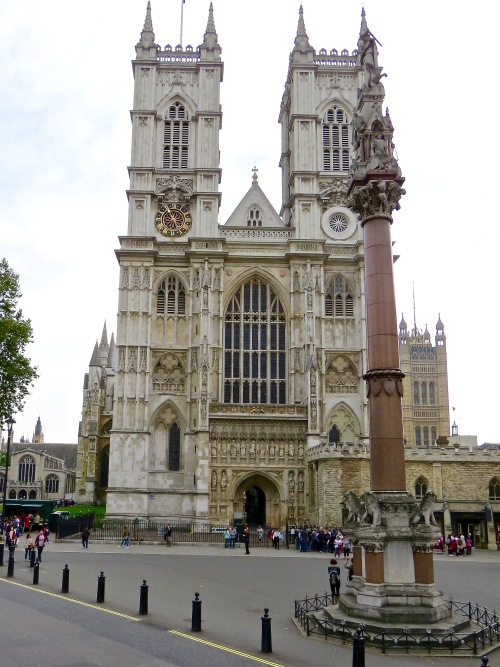 Thames River Cruise. (Included on the London Pass.) We boarded the boat at Westminster for what was to be a short ride– but not short on visual delight. From the Thames you get great views of London and many of its iconic buildings and attractions.

Some of the most notable were: the Palace of Westminster, the London Eye, St. Paul’s Cathedral, London Bridge, the Shard, Shakespeare’s Globe Theatre, The Tower of London, Tower Bridge and Cleopatra’s Needle.

Cleopatra’s Needle is actually a twin to one that now resides in New York City. It was originally from the Egyptian city, Heliopolis, erected there in 1450 BC. It was moved to London in 1877.

The forecast had predicted rain and the sky looked pretty threatening. The good news was that the rain held off and the boat wasn’t too full. This allowed me to be able to take some decent photographs.

The London Eye from the Thames River. 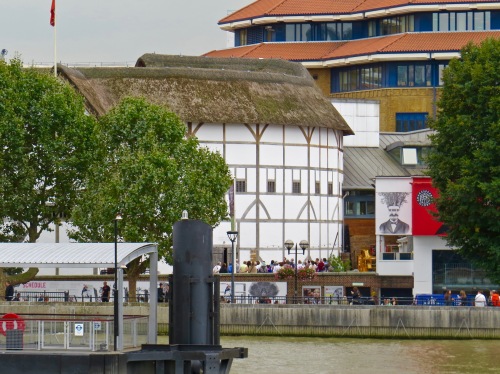 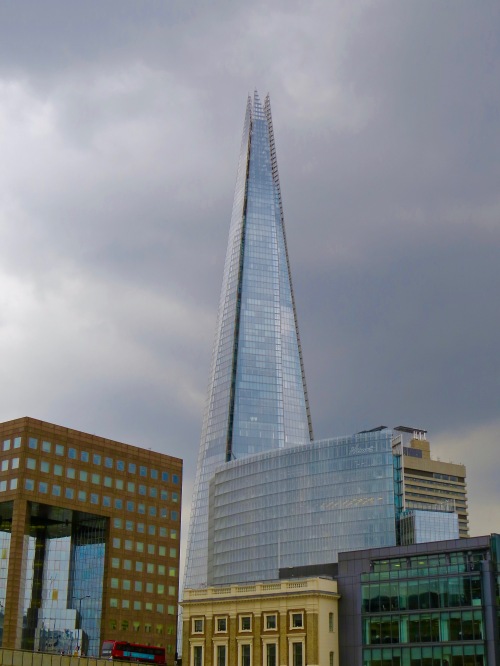 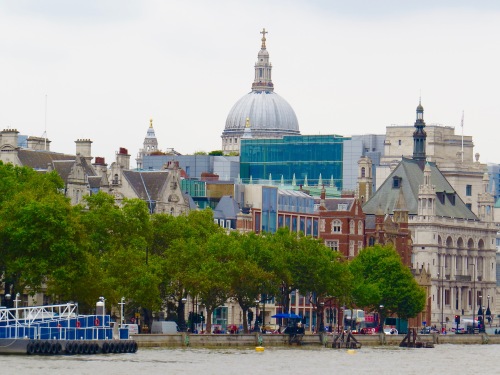 St. Paul’s Cathedral is prominent in the London skyline along the Thames River. 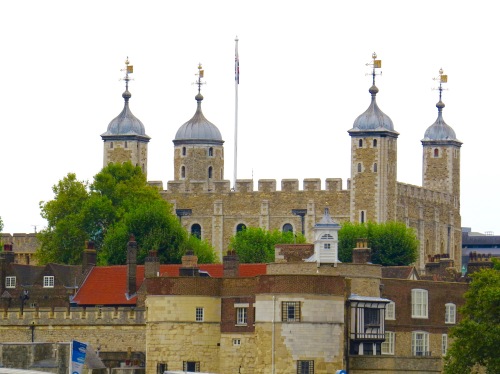 The Tower of London.

Tower of London. (Free with the London Pass.) This massive castle and fortress was built by William the Conqueror beginning in 1066 and is an UNESCO World Heritage Centre. I most enjoyed walking the walls of the fortress looking over the property and out at the city around it. While we were there, it started pouring rain so we tried to avoid it as much as possible, which also meant skipping the line to see the Crown Jewels.

At one point we made the decision to climb over 300 stairs which in the end, seemingly led to no where. The only stairs down left us trapped in a crowded basement gift shop. We had to maneuver our way through, only to climb more stairs to get out.

I’m glad I visited the Tower of London but found many of the displays, artifacts and replicas a little too “Disney” and not my cup of tea. 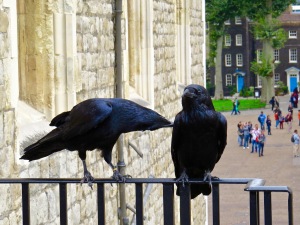 Two of the six “Guardians of the Tower”.

My favorite moment was finding two of the six ravens- the Guardians of the Tower— together. Legend says “If the ravens leave the tower, the Kingdom will fall…” There are actually seven ravens– the required six and one in case one goes missing. This legend and practice goes back to Charles II. 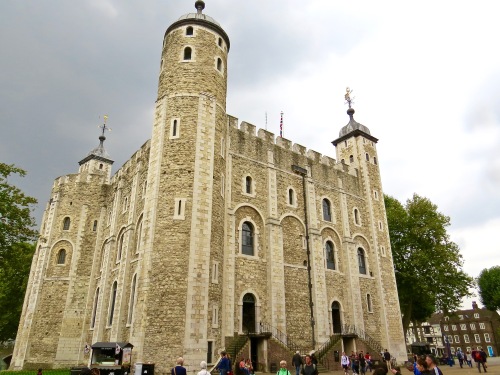 In our attempt to find the nearest Tube station we found Dickens Inn and decided to have dinner before our evening show. There were actually three different restaurant levels and we picked the one that doesn’t get busy until later in the evening– which might have been a good thing; but being early, service ended up being a little slow. Still, we were seated outside on a balcony with a cool breeze and a great view and that made up for the delay.

After dinner, even using the phone app, we got a little turned around in our directions. We got stuck in a maze of wooden walkways in this upscale little condo/boating enclave. Eventually we found our way out, made it to the Tube and back to Covent Garden for our fourth show in London.

The Curious Incident of the Dog in the Night Time.

The Curious Incident of the Dog in the Night Time. I was pretty stoked to see this play. It had won a lot of praise and awards on both sides of the pond. Michael and I really enjoyed the first act but thought it lost it’s momentum in the second.

Maybe it was just an off night or a problem with the pacing, in either case, we were left a little disappointed. 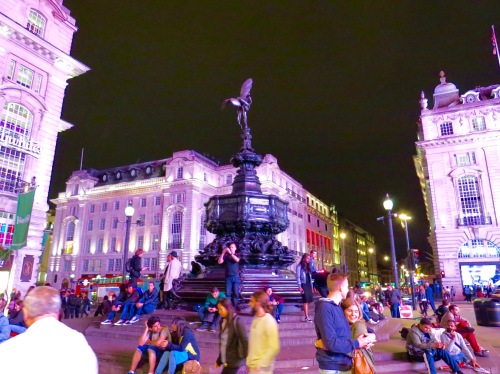 What a day! Looking back it’s hard to believe we saw so much in a single day. Only one day left in London. Tomorrow? Buckingham Palace and more.