We started the day enjoying the ambience of our hotel and a hearty breakfast in the Chamber Club. Our last day in London. Our day was mostly planned out ahead of time so we weren’t rushed getting started.

Buckingham Palace. We purchased tickets to tour the State Rooms of Buckingham Palace with an add-on garden tour, way in advance of our trip. The ticket also included a large exhibition of the Queen’s clothing entitled, Fashioning a Reign: 90 Years of Style From the Queen’s Wardrobe.

The State Rooms tour is only available during July-October. I was extremely glad we were going to get this opportunity. 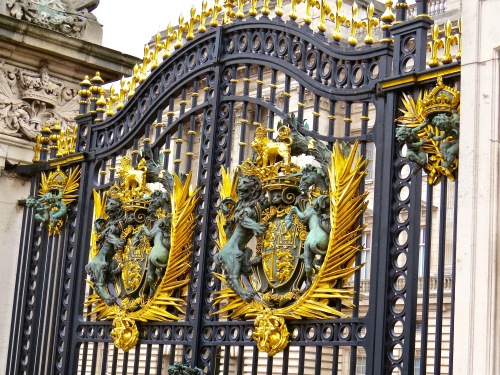 The Royal Gate at Buckingham Palace.

Upon arrival, I got the bad news that no photography was allowed in the Palace. I always find this annoying, especially when you are being charged admission in the first place. You see people ‘sneaking pictures’ (which almost always turn out bad) that they will surely post on social media–so doesn’t that defeat the point? I behaved (inside at least) and left my camera in my bag while in the Palace. We were told we could take as many pictures as we wanted in the gardens afterwards.

The 19 State Rooms (public rooms) are each ornate and unique in their decor.  The Green Drawing Room and the Music Room were my favorites. What is really great about touring Buckingham Palace is that it is a living museum. It is actually lived in and used to receive guests. There are many breathtaking pieces in the Royal Collection. Also, the self-guided audio tour (with touch screen options) is one of the best I’ve seen.

The fashion exhibition was quite interesting as well. The exhibition is actually taking place in three locations. (Also at Windsor and Holyroodhouse.) The selected pieces of the Queen’s wardrobe are tied most directly to the location where they are displayed, 150 pieces in all. The only drawback was that the display blocked the grand view of the ballrooms where they are located.

The back, or garden side of Buckingham Palace.

We finished the tour and discovered we had an hour until the garden highlights tour started. This was frustrating because we could not leave the garden terrace and re-enter, meaning that we missed the changing of the guard in front of the Palace.

A view of the gardens from the terrace of Buckingham Palace. 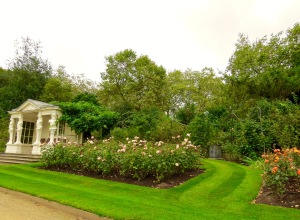 Part of the Queen’s Rose Garden at Buckingham Palace.

Buckingham Palace Gardens. I had thought the garden tour was a great idea. It was an inexpensive add-on to our Buckingham Palace ticket and it’s the only way you get the opportunity to walk through the gardens. It ended up being a let down. First, no pictures. Second, there wasn’t much to see– mostly grass and trees.

The tour was basically a big loop around the perimeter of the gardens. There were a couple statues and the Queen’s rose garden– where I quickly snapped a picture unseen. We also passed the tennis courts but they were mostly blocked by trees and shrubs. I was surprised to find that there was no formal English garden on the property.

I think I figured out why they didn’t want photographs– evidence that the tour is a waste of time and money perhaps.

Leaving the Palace, we decided we were ready for a break. I’d wanted to visit the Queen’s Gallery and possibly the Royal Mews, but instead, we decided to spend a couple relaxing hours at the hotel. On the way back, we stopped at the Wellington Arch. It was an original entrance to Buckingham Palace, later representing Wellington’s victory over Napoleon.

New Friends. About a week before we left home, an old friend told me that her boss was going on our Broadway cruise and that he splits time between London and Chicago. We got contact information and planned to meet Anthony and Michael at The Lobby Bar at One Aldwych before our show.

Michael at one of the gates of Somerset House.

Arriving early, we decided to walk the neighborhood. By chance, we found Somerset House— which was on my short list to visit.

We didn’t have the time to wander through but did have a few minutes to enjoy the large plaza and exterior architecture. There’s an art gallery, the Courtauld Gallery, I really want to visit in the future.

We were there a few days before the official start of London’s Fashion Week, so there was a lot of activity there.

The plaza at Somerset House.

Michael was waiting for us when we got back to the bar and Anthony joined us a few minutes later. Very nice guys. We had about an hour to get acquainted and talked a little about London, theatre, and what to expect on the upcoming cruise. (Their first one.) Then we parted ways– they were headed to see The Entertainer and we were on our way to our last show in London– and our most anticipated. 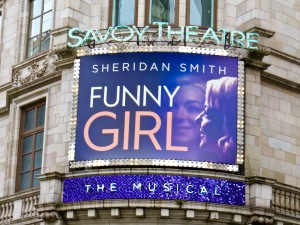 Funny Girl at the Savoy Theatre. Producers have been trying to bring a revival of Funny Girl to Broadway for years with no success. Could the success of this London production be just the push that it needs?

Any production can’t help but be compared to the original Barbra Streisand vehicle that made her a star. But is that fair? Is there another Streisand in the wings?

Sheridan Smith, who leads the cast of the London production, is clearly not Barbra Streisand. My argument is that she doesn’t need to be. She does need to embody Fanny Brice though– at this she misses the mark.  Smith is a good actress and a fair singer. Her portrayal here (as pointed out by Michael after the show) is more Melissa McCarthy than Fanny Brice. Her Brice character is empathetic and likable, don’t get me wrong. It’s just that I can think of a dozen actresses that could have acted and sung it better.

Another huge weakness in this production is the choice of  Darius Campbell as Nicky Arnstein. He’s too cute. Campbell is more reminiscent of Zac Efron in High School Musical than Arnstein–the gambling, debonair man of the world. It just doesn’t play believably.

My last gripe is the cast is too small. I’m sure it worked perfectly in the smaller Menier Chocolate Factory Theater (sold out run). I would have thought with the move to the Savoy, a few more actors could have been employed. This story revolves around the Ziegfeld Follies which evokes images of a large dancing chorus. Not here. Especially frustrating was when male ensemble members took on multiple roles within minutes of each other with no effort to disguise them. It was just confusing.

All that said, I did enjoy the production, in spite of its flaws. I just can’t imagine a Broadway transfer which means American audiences will have to continue to wait.

We made one final stop at Shake Shack on the way back to our hotel.

Tomorrow we’re off to Rome.