The first half of the day couldn’t pass fast enough! We were both up early, last minute packing check, I took Belle and Dudley for their boarding/’vacation’ and Michael went in for a half day of work. We’d checked in with the airline and printed our boarding passes the night before.

Everything was on time and Peggy drove us to the airport late afternoon. We went to check our luggage and noticed right away our seats were changed. No big deal– but wait! We weren’t sitting together. Why did this change overnight?

The new seating arrangement was 2-1-2. I was now assigned on the left side, seated by a stranger and Michael was in the single center seat– in what appeared to be business class. Except, we had paid for first class.

It was a full flight and there was no way to change our seat assignments at the kiosk. We tried to get assistance but no one could explain what happened or knew how to fix it. We went ahead and checked our bags and went through security, hoping to fix the situation at the gate.

We have global entry and TSA Precheck…. advantages include: leaving shoes and belts on and you don’t have to take your computer/electronics out of your bag. Well, both of us set off the detector and were stopped for further screening. Michael just had to take off his shoes but I had to wait to be searched. Of course, no one was there to do this and there were five people ahead of me waiting. I went through the x-ray body scanner,  got the pat down and then the metal detector wand. It was showing something above my ankle. I had to remove one shoe — yet still it was detecting metal above my ankle– they checked again, then let me through.

We were headed to the desk at our gate when we saw a United Customer Service Center. No help. Beyond the fact that they changed planes, they couldn’t explain why we had been separated and they couldn’t fix it. Actually, after checking his computer and then several minutes on the phone, the rep gave us false information. He tried to claim we were still in first class (we were supposed to believe business class seats, randomly placed, were ‘first class’) and that this was one of the newly renovated planes (it wasn’t). He insisted there was no way we could be seated together.

I fired off a couple Tweets at United. I’d heard of people getting responses in the past so I thought it was worth a try.

No one was manning the desk at our gate yet, so we decided to go to United’s Polaris lounge. They let us in but told us they were full and there would likely be no open seating for at least 40 minutes. The regular United lounge in the terminal was closed and they were apparently letting everyone (‘eligible’) use this lounge instead.

So far, this wasn’t going well.

Luckily, we didn’t wait long before we were able to grab a couple seats. In less than 30 minutes, the lounge was nearly empty. Michael and I discussed our frustration about the flight and I expressed the fact that there was no way I was going to be able to do any sleeping right next to a stranger. An eight and a half hour flight can feel monotonous enough without making it any more uncomfortable.

By the time we were boarding, a United Representative was waiting for us and said they’d try to get someone to move so we could be seated together. We also wanted to know why we being told first class was the same as business (it isn’t). The Rep was very nice, apologetic and said he’d see what he could do. 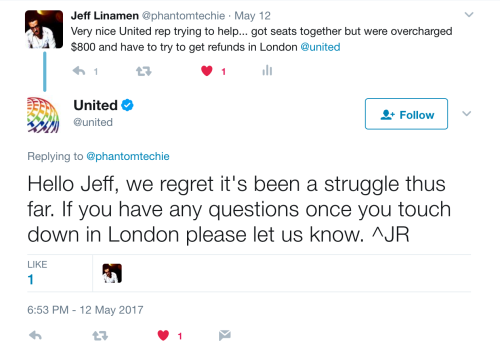 On the plane, we were able to switch seats and sit together. The Rep checked on us again and confirmed that they had switched our flight from a three class (first, business, economy) to a two class (business, economy) plane. He also apologized for us being given false information regarding the change and said he’d make sure it was addressed. We were now owed a substantial refund.

What makes me really aggravated about this is that 1) we booked this flight months ago; 2) the plane change should have happened before check in; 3) a misinformed customer service rep chose to give us false information as opposed to saying he didn’t have an answer. Thankfully, the customer service rep at the gate was honest and extremely attentive. I felt he did everything he could at that moment to rectify the situation and make us feel like we (the customers) were important (to the company).

Why am I sharing this? Because our experience might help someone else in a similar situation. I think it’s important to try and handle things in the appropriate way. We could have a) taken out our frustration on reps in a rude manner (when it wasn’t their fault); or b) not said anything, letting it fester and put a damper on the the beginning of our adventure. Neither would have resulted in a happy outcome.

United should have been proactive. With the plane change, they should have seated us together and informed us of the change when we checked our bags. They also should have automatically refunded us the difference in the price between first class and business class tickets. Had this been done, the confusion would have been eliminated and we would not have been left to try and figure out what happened ourselves.

The flight itself was pretty uneventful. I watched the movie Allied and was able to get a few hours sleep before we landed.

By the time we reached London, we felt relaxed and were able to put the rocky start behind us.

Now, as long as United issues a refund for the difference in ticket price, I think we’ll be satisfied with the outcome.