We started the day at the Tate Modern. This was the one day we’d pretty much scheduled out ahead of time, start to finish, knowing that later, we’d be spending eight and a half hours at the National Theatre. We chose to visit the Tate Modern this morning because of its close proximity to the theatre and we hadn’t explored the South Bank.

Looking up at the former Bankside Power Station, now the home of the Tate Modern.

The Tate Modern hosts a large collection of international modern and contemporary art from 1900 to the present. I didn’t know until after our visit that the building itself was the former Bankside Power Station. This explains its unusual, cavernous design. 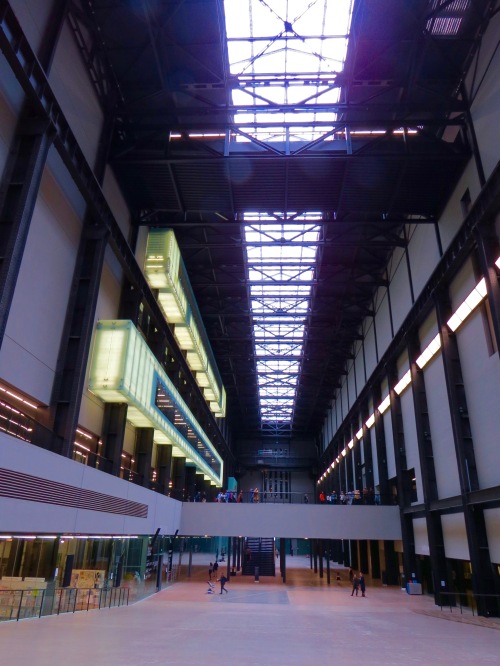 Inside the cavernous entrance of the Tate Modern, the former Bankside Power Station.

The wide variety of artistic styles here, span from late Impressionism to modern sculpture and art in advertising. Overall, I found the museum quite stimulating and well conceived.  Even though I find a lot of modern art not to my taste, there were many works and artists represented here for whom I have a great fondness.

Lightning with Stag in its Glare by Joseph Beuys.

Metamorphosis of Narcissus (1937) by Salvador Dali.

One of the gallery spaces inside the Tate Modern.

We left the museum with plenty of time for an enjoyable walk along the Thames. There are many restaurants and shops along the South Bank and quiet little parks as well. This area of the embankment is known as The Queen’s Walk.

A beautiful view of London from the South Bank of the Thames.

The rest of the day was spent at National Theatre’s production of the Pulitzer Prize winning play, Angels In America. The opportunity to see it was the catalyst that brought us to London (prior to our cruise) instead of NYC.

Angels In America: A Gay Fantasia on National Theme is Tony Kushner’s 1993 play in two parts, entitled Millennium Approaches and Perestroika. It’s an epic journey that explores AIDS and Homosexuality in 1980’s America. 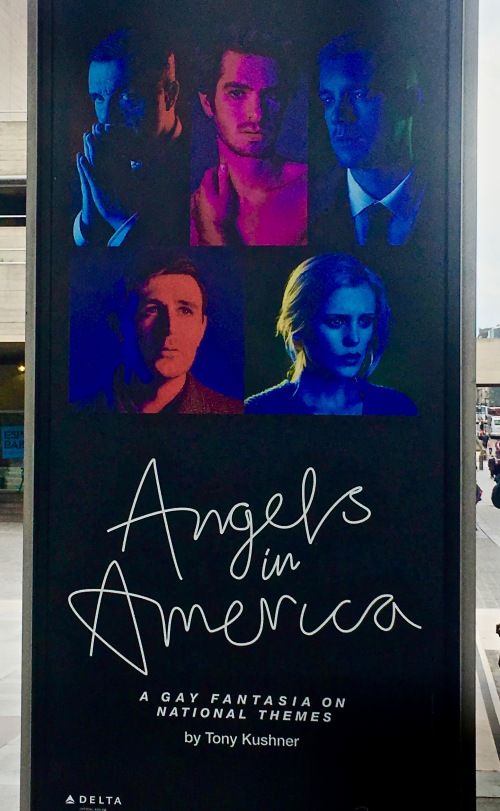 The National Theatre’s production features impressive performances by Andrew Garfield, Russell Tovey and Nathan Lane, among many others.

We were lucky enough to purchase excellent seats, in a combined event ticket, that included both parts presented in one day. The entire run of the production quickly sold out after going on sale.

Each part also had two intermissions. We had about a two hour break between parts one and part two for dinner, that we spent at a nice restaurant between the theatre and the London Eye. The actual run time, including intermissions (but not the dinner break), was just over eight and a half hours.

The production is incredible. The time flew by. Honestly, the experience is nearly impossible to describe. The revealing (or realization) of the Angel at the end of the first part was pretty ingenious — as frightening as it was beautiful.

I have to say that I cannot imagine seeing Millennium Approaches and Perestroika separately. They are so closely woven and dependent on each other in the scope of the entire piece. This is a historic work– it not only captures a  dark moment in history– it is ground-breaking in its structure and form.

When we left the theatre, we entered the misty night air and walked across the Waterloo Bridge to the Tube. We couldn’t help stopping on the bridge and enjoy the wonderful night view of London.

London at night from the Waterloo Bridge.