Our last full day in London was to be a very wet one, start to finish. We’d actually been pretty lucky with the weather– mostly sunny days and temperatures slightly above the norm for this time of year. There was no way we were going to let a little rain dampen our spirits. We grabbed an umbrella and headed out for another busy day.

The Monument to the Great Fire of London is the world’s tallest isolated stone column. It is most commonly referred to as The Monument. Designed by Sir Christopher Wren, it stands to commemorate the Great Fire of 1666. It’s hard to get a perspective of its size in a picture– so consider that there are 311 steps that go up to a viewing platform at the top.

The Monument to the Great Fire of London.

One of the interesting things we found online before our trip was the Sky Garden in the Walkie Talkie building, 20 Fenchurch Street. 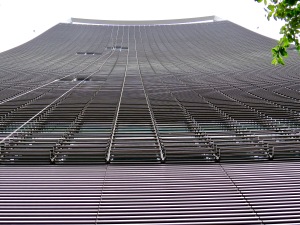 Looking up from the base of 20 Fenchurch Street, nicknamed the Walkie Talkie building.

The building itself, nicknamed for its unusual shape, is considered by many as “the worst building” in the U.K. Completed in 2014, it has 34 floors, the top three made up of the Sky Garden, bars and restaurants.

The Sky Garden is London’s highest public garden and it offers an uninterrupted, 360 degree view of London. It’s free to visit but tickets are required. It’s highly recommended you reserve them in advance because it is frequently filled.

The Sky Garden has tiered levels for enjoying the spectacular 360 degree views. 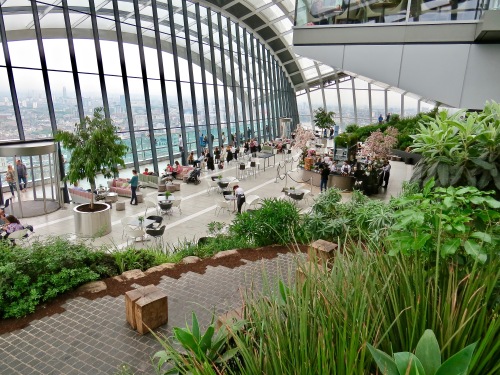 Looking out over the Sky Garden.

In spite of the cloudy skies and rain-spattered windows, the views were spectacular. There is an open air observation deck on one side, with rest of the views through large panes of glass. 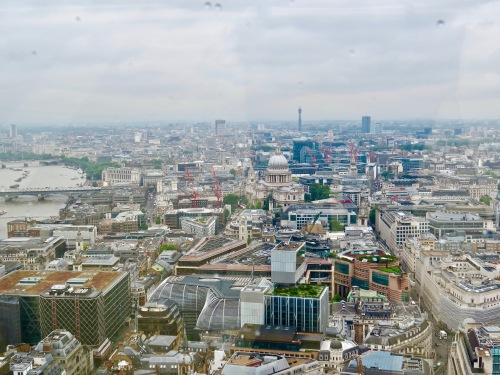 The Gherkin (right) from the Sky Garden. 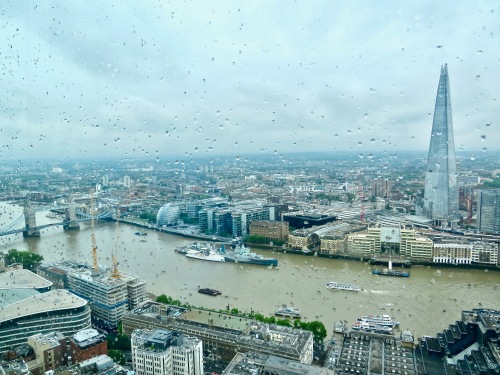 The River Thames and the 95-story Shard Building on the right. 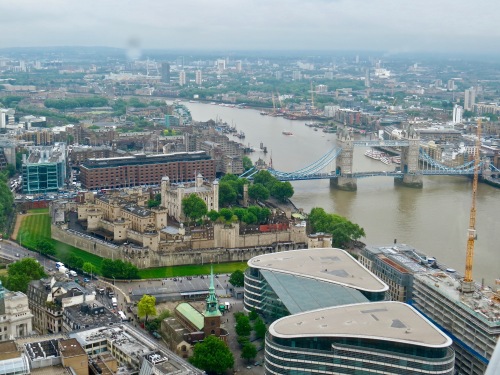 Looking out at the Tower of London and the Tower Bridge.

It started raining again so we took the Tube as close as we could, to our matinee performance of Les Miserables. Why Les Miz? Yes, we’ve seen many professional productions– in NYC and on tour. Maybe even a dozen. BUT we’d never seen it in London– where it all began. AND it’s Michael’s favorite musical.

Les Miserables at the Queen’s Theatre.

Les Miserables has been running continuously in London for nearly 32 years!  One fact you may not know, is that the events in the show, occur around the June Rebellion (or The Paris Uprising of 1832) NOT the French Revolution (1789-1799) as many people believe.

At intermission, we both commented that we thought is was way to fast! Now, when Michael agrees that something is too fast– it’s too fast. When we see shows, he’s always saying they could pick up the tempo. Sure, a performance differs from one to the next– but this, apparently, wasn’t a fluke. A friend who saw it two years ago asked if they were still speeding though it.

I found the differences in staging from the original Broadway production interesting. (I’m assuming this is still the original staging.) Some things worked better than others and I could also see why some were changed. All in all, in spite of the pace, we still enjoyed it.

Inside the Queen’s Theatre before the performance of Les Miserables.

It was pouring rain after the show. We headed over to the Savoy Theatre and picked up our tickets, hoping to find a place for dinner nearby. While we were there, we went in the Savoy (Hotel) to check out the lobby.

In the lobby of the Savoy, looking in to the dining room.

We found a place across the street for dinner– appropriately called Eat. We did.

Our last show this visit– and another one of the reasons we came to London: the musical Dreamgirls.

A little backstory is necessary. We saw Amber Riley (Glee) was starring in the London production and really wanted to see it. I went to order tickets, front and center, and I had the option of getting the same seats with something called ‘blue box’ for the same price. This said it included a drink and snack. Okay… same price… why not? The tickets were about 80 pounds or $102 USD. At New York ticket prices, it would have been a minimum of $149– probably over $200 because these would be considered ‘premium seats’ — without a ‘blue box’.

I purchase the tickets. Done. Then get a message (after they were paid for, no refunds) that Amber Riley doesn’t perform all the Wednesday night shows! Not happy. Then the show opened in London, won a number of Oliver Awards, including Best Actress (Riley) — so we just kept our fingers crossed. Maybe we’d get lucky.

We get back to the theatre for the show… soaking wet from the rain and they held us at the door. No, clue what was going on. Then the usher tells us we’ve been upgraded to ‘red box’. Huh? We waited until they escorted us to a private lounge where we were given drinks and snacks until we would be escorted to our seats just before the lights went down. 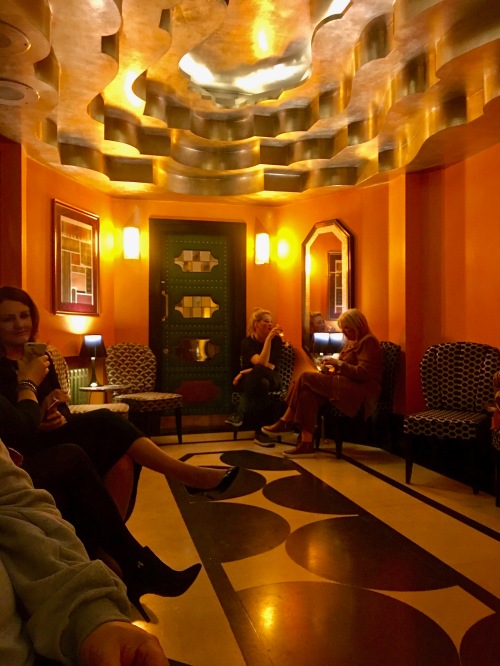 Phone pic inside the Ambassador Lounge.

At the busiest point, there were only eleven people in the lounge and we had two servers. They also held our wet things in a private coat check until after the show.

So why the VIP treatment? No clue! We just kept our fingers crossed that the good luck would continue and Amber Riley would walk out on that stage. Our hostess told us they’d meet us at the interval and bring us back to the Ambassador Lounge for drinks– this was just way too cool.

We took our seats– and I think we both held our breath until Effie walked out on that stage. Exhale. Amber Riley was performing!

All I can say is WOW! Everything about the show was perfect. It was beautiful to look at, full of power and emotion– and every single cast member was amazing. Problems we’ve seen in past productions with pace and flow were nonexistent. Riley stopped the show with And I’m Telling You I’m Not Going and Listen (added to this production from the movie) with her costar during the later.

This Dreamgirls will definitely never leave me.

Sometimes the stars align and everything is right.

Tonight was simply beyond wonderful.