Our five days in London had flown by. Still feeling the exhilaration from yesterday’s incredible adventure– we got up, packed, and prepared for the next leg of our journey. We had coffee outside the lobby of St. Pancras, as had become our morning routine, enjoying the bright morning sun and going over our schedule.

After breakfast, I walked the grand staircase, one last time– just relishing the beauty of it. I love St. Pancras. It’s hard to fathom that it barely escaped demolition and is now fully restored.

As guests in the historic part of the hotel, we were entitled to VIP service for the Eurostar to Paris at the adjoining St. Pancras International Railway Station. We were met in the lobby and escorted to the station, through customs/immigration– all the way to boarding and stowing our luggage on the train. It couldn’t have been easier.

All aboard! Preparing to leave London on the Eurostar.

Traveling Europe by high speed train is a fast, convenient and inexpensive alternative to air travel. From London to Paris took us two hours and twenty-two minutes. From St. Pancras International, the Eurostar took us through the Channel Tunnel and across the French countryside before arriving at Paris Gare du Nord. The distance is nearly 3oo miles. (By car the trip takes over six hours.)

I’d like to give you a highly romanticized version — riding the rails. Truthfully, from the scenery outside my window, it could have been a train ride anywhere in the world.

The one thing I did notice was for a good portion of the trip, we’d pass a church steeple seeming to stick up out of the fields every few miles. I saw dozens of these and they all looked similar.

Don’t get me wrong– some of the scenery was beautiful– it’s just not unique. I say this for anyone considering the train option purely in hopes of seeing a different world of small villages, farms and sights unique to France.

None of that really mattered to us though– because we were on our way to a new city. We’d be experiencing Paris for the first time.

A view of the French countryside from the train.

We arrived at Paris Gare du Nord and found our driver waiting for us at the end of the track. He escorted us out of the station and drove us to our hotel. Our stay at Hotel Scribe had been arranged through Judy Perl Worldwide Travel that handles the bookings for Playbill Travel. We arrived a day earlier than many of the people going on the Broadway on the Rhone cruise, who were also doing the pre-cruise stay in Paris. 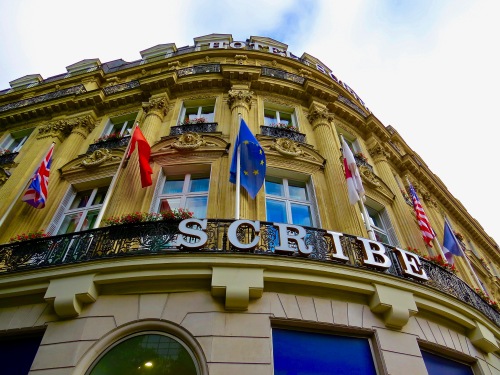 After checking with the desk, we had a little time before our room would be ready, so we went for a walk through the neighborhood– part of the 9th arrondissement. Just down the block from our hotel was the Palais Garnier. It’s consider one of, if not the most famous opera house in the world.

The Palais Garnier is the setting and inspiration for Gaston Leroux’s novel, The Phantom of the Opera, adapted into many movies and of course,  Andrew Lloyd Webber’s  popular stage musical. 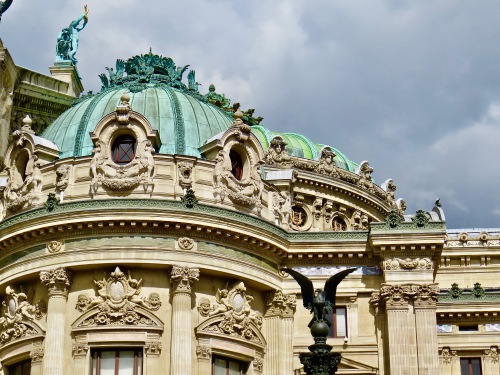 After a pleasant walk, we returned to the hotel and got settled in. We checked the weather and were trying to decide if we should chance the threat of rain. A storm was rolling in and decided not to risk it.

We heard from our friends, Laura and Cass and met them down in the lobby. After a little catching up, we decided to go to dinner at a cafe/brasserie recommended by the front desk. They got us a reservation and we headed there, just across the street. It was pouring rain!

The restaurant was packed. Capucine Cafe is a lovely little place with great food and plenty of atmosphere. We were seated by the window on the second floor–with a nice view, as the rain continued to flood the street below. 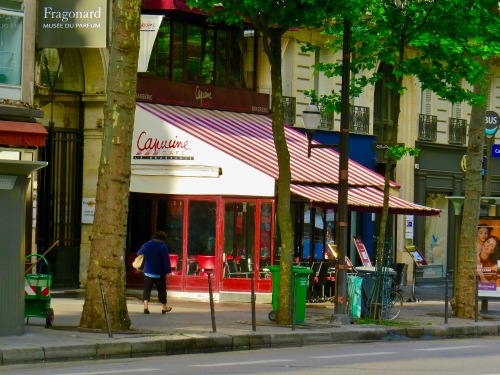 Capucine Café across the street from our hotel.

We had a great time catching up, with our conversation bouncing from topic to topic. Then before heading back to the hotel, we planned our big day ahead. Tomorrow the four of us were heading to Versailles.

Little did we know– it would be a much bigger adventure than we were expecting!