Sunrise in the harbor.

Southeast Asia Travel Day Nine: Michael and I woke up this morning just as we set sail, leaving the port in Ho Chi Minh City at 5:30 AM. We sailed along the Saigon River heading out to sea. Little did we know that for the next hour we’d be part of some craziness that would be the talk of the ship.

Setting sail in the Saigon River.

As the Le Soleal was maneuvering through the river, we’d feel the ship slightly tilting as we sailed. I had jumped in the shower while Michael was dressing. The ship rocked a bit tilting to the left and I heard a loud rushing sound like someone dragging something across the floor. When I came out of the bathroom Michael explained the sound– and our morning adventure began.

Along the Saigon River.

It seems that when they were getting the ship ready for boarding, someone forgot to lock the wall adjoining our cabin to the one next to us. (With the wall open it is reconfigured as a suite.) So every time the ship tilted to the left, the wall would slide open revealing our neighbors who were sleeping in the next room. I emphasis WERE sleeping.

As the wall opened, Michael was staring directly at them and said he couldn’t think of anything else to say besides, “Good Morning!” Luckily, it was a couple (Peggy Sue and Champ) we’d already met and toured with, so they weren’t complete strangers.

After an hour of repeatedly shutting the ‘wall’ (and trying to hold it shut) and four phone calls, three men finally showed up at our door to fix the problem. I’d been sitting there working on my computer and holding it closed while Michael finished getting ready.

Phil Birsh, President and CEO of Playbill, stopped us in the hall later in the day, apologized and asked us if it was okay if he used it as a funny story to tell that night before the concert. We said ‘yes’. He, of course, embellished the story and had everybody laughing. He added that Peggy Sue and Champ and Michael and I had already booked Italy (BOTHS7) and had requested adjoining rooms. It was pretty funny. 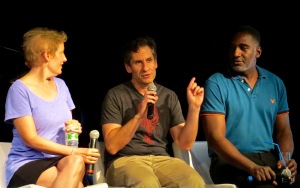 A day at sea is a little more relaxed than an excursion day but full of programing with the Broadway stars. First, Seth Rudetsky hosted a talk about Miss Saigon with Liz Calloway who played Ellen in the original Broadway company (and had a baby a month before it went into production), and Norm Lewis who played John later in the run.

That was followed by a talk, later in the afternoon, with the legendary Tommy Tune– who’d been a surprise guest on the cruise, talking about his career. 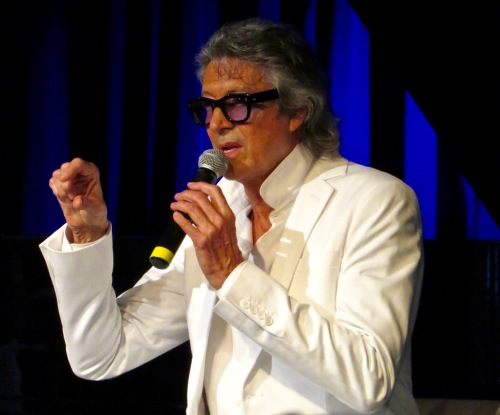 Before dinner, Michael and I went up to the deck that overlooks the pool and found a bat hanging in the corner, just inside door. We had to get a crew member to come remove it because we thought it might scare someone, or God forbid, start flying around inside the ship. Yes, these things happen to us.

The concert that night was with Lindsay Mendez. Of course it was wonderful. We were thrilled to finally see her performing live for the first time.

The finally event of the night was Playbill After Dark. Seth Rudetsky hosted a Broadway trivia game and we won a 2016 Playbill calendar. It was quite an adventure for the first full day aboard ship.