London, Rome and Broadway On the High Seas 7- cruising southern Italy. This time around, we booked our own pre cruise adventure– with the exception of the hotel in Rome, booked through Playbill Travel. The first five days we were on our own to create our own experience.

It’s funny how months of preparation and research fly out the door in the few days prior to leaving on an extended vacation. This was our third trip overseas and you’d think I’d be used to that last-minute feeling of anxiety but it still takes me by surprise.  I suddenly found myself forgetting and rechecking everything I’d prepped for; probably asking Michael the same questions repeatedly, hopefully not driving him too insane. All the research on London and Rome was a jumbled mess in my head so I found myself going back over notes I’d made just to be sure I was ready.

This was the first time traveling since we got the Global Entry clearance which includes TSA Pre-check. Of course, wouldn’t you know I was one of the people randomly selected to be scanned at security. Luck of the draw.

We flew to London Heathrow, direct flight, business class– on an evening flight out of Chicago O’Hare. The seating on this American Airlines flight was cozy yet smaller than past times we’ve flown business class. I watched two movies: All the Way and Trumbo, both starring Bryan Cranston, and enjoyed them both. Though I did manage to get a little sleep, I’ve found it’s really difficult for me to sleep more than a couple hours in the air. Michael, on the other hand, can sleep like a baby.

Overall, the flight was comfortable and it was on time. We arrived at Heathrow shortly after 9 am and breezed through to pick up our luggage. 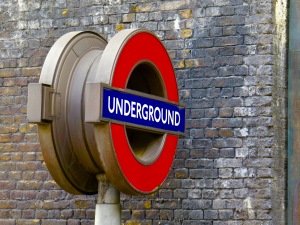 The Tube is the best affordable way to get around London.

Luggage and the Tube

We don’t travel as light as we probably should, so we found ourselves both lugging our two checked bags and two carry ons– that’s right… on the Tube. Aside from being a little awkward manipulating, it wasn’t as bad as I thought it might be. Except– that moment when we reached the first very steep escalator in one of the stations. I had a moment of acrophobia and kept it under control by staring at the back of Michael’s head.

The ride took us about 45 minutes to reach central London. Did I mention that I still didn’t know where we were going?

You Call THIS a Hostel?

Michael spent many hours researching London accommodations, months prior to the trip. To keep me guessing, he decided that our destination would be a surprise. It became a running joke that we were staying in a seedy hostel, complete with rats, paper-thin mattresses and a shared bath.

As we got closer to the trip, Michael would get “daily email updates” that he’d share with me each morning before he left for work. He’d inform me of pending updates such as ‘new pots to catch the water from the leaky roof’, warnings to ‘sleep with one eye open’, our daily ‘work assignment’– crazy stuff like that.

I can’t tell you how many times we’d finish watching TV or a movie and he’d say, “Did you see our hostel?” It was even one of the locations used in an episode of Downton Abbey that we re-watched before the trip. I was clueless.

The whole time, I knew I was in for something pretty incredible but Michael still managed to outdo himself. Our ‘hostel’ turned out to be the historic and opulent, St. Pancras Hotel.

We got off the Tube at King’s Cross, exited the station to the street and Michael just stopped in his tracks. “There’s your home for the next few days,” he said. I looked around and was a little confused. All I saw was this stunning, monster of a building– complete with clock tower, across the street. Overwhelmed would be an understatement. Welcome to St. Pancras! 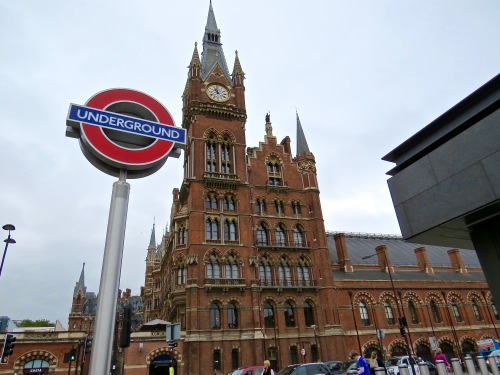 My first view of the St. Pancras Renaissance London Hotel.

Arriving early in the day, we didn’t expect our room to be ready. I soon found out Michael had scheduled a tour of the impressive building shortly after we checked our bags. (I’ll write a separate blog post just on the hotel– too much to include here and visually too impressive not to share.)

After touring this magnificent facility, we were able to check in to our room. And as if my head wasn’t already full enough, Michael had snagged of of the three designer suites in the hotel– the Sir George Gilbert Scott Suite. The suite was named after the building’s architect. You’ll see in my next post, images of this carefully restored slice of history.

Staying in the historic section of the St. Pancras, we also had exclusive use of the Chambers Club where we could have breakfast, afternoon tea or just relax.

After settling in, we had just enough time to head out, catch the Tube and do a little exploring before our first show.

My First Visit to the West End

The West End is often referred to as London’s equivalent of the Times Square Theatre District in New York City– only it isn’t. Yes, it is the hub of many entertainment venues in London but that is where the comparison stops.  I found the West End to be quite charming and warm. Though it was bustling with activity, it was still easy to take a relaxing stroll through the area. The streets are loaded with unique shops and quaint restaurants enticing theatregoers around every corner. There is completely different vibe here than the tourist-driven frenzy that exists in New York. 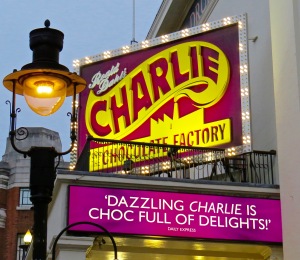 Our first show– my first ever in London, was Charlie and the Chocolate Factory. Perhaps a little ironic that it was written by the American musical theatre team of Marc Shaiman and Scott Wittman who also wrote the hit musical, Hairspray.

I loved it! As opposed to trying to compare it to other productions, I’ll say this: It was probably my most thoroughly-satisfying theatregoing experience in the past ten years. The physical production, the cast and the adaptation were all nothing short of magical. As one of my most favorite and most-memorable books growing up, this production of Charlie… made me feel like a kid again– rediscovering Roald Dahl’s delicious tale as if it were the first time. I can’t say enough good things about it.

From our seats, inside the Theatre Royal Drury Lane.

By the way, Charlie and the Chocolate Factory is slated to make it’s Broadway debut next spring.

After the show, we took a leisure stroll through the West End with one destination in mind: Shake Shack.

The Shake Shack on 8th Ave has become one of our go-to places when we’re in NYC. With their popularity growing, others have started to sprout up in major cities around the world. (London already has three.) Michael and I both love their thick creamy concretes and their burgers and Chicago style hot dogs are good too. London’s Covent Garden location didn’t disappoint. It became our nightly stop before returning to the hotel every night after our shows.

Bellies full and exhausted, we returned to our hotel and actually slept through the whole night, peaceably.

On the street in the West End.

The Nags Head in the West End.