Home » Lifestyle » Travel 2016: Day Nine – And God Said, Let There Be Rain… And Waves…Lots and Lots of Waves

Travel 2016: Day Nine – And God Said, Let There Be Rain… And Waves…Lots and Lots of Waves

Soon It’s Gonna Rain. We knew for a couple days there was a likely chance of rain today. As a matter of fact, last night the prediction was above 80%. Not just a shower… rain all day. Troupers that we are– and because you can’t cancel an excursion without at least a 48 hour notice (without paying anyway)– We got up early, dressed appropriately, had breakfast and watched as we were hit with the first down pour.

Our tour was supposed to take us to explore Taormina and Castelmola this morning. The key phrase here is supposed to. All tours ended up being cancelled with ongoing weather concerns anticipated throughout the day and because we were supposed to tender into port. The water was just to rough to safely make it to and from land.

Unfortunately for us, the decision was not made until around 10 AM, long after our scheduled tours were supposed to have started. This left us in limbo, waiting for the final word. It’s too bad we hadn’t known the night before because we could have caught up on some much needed sleep. This is just one of the chances you take with cruise travel.

What To Do? The good news was that the change in plans gave us time to socialize. We had a favorite spot where many of the same people would gather at some point, day to day, throughout the week. The conversations were always lively and anything was fair game– we didn’t just talk Broadway. You could frequently find us with Janet, Paul, Bill and a few others engaging in some animated fashion. One of my favorite ongoing discussions was with Susan, Champ (He was in the cabin next to us on the last cruise with the wall that slid open!) and Philip (Lindsay Mendez’s husband) discussing the upcoming election. After more than a week away from home, I was itching to get some things off my chest.

One thing that I’ve noticed– if you put a group of theatre lovers together in a room– they can talk about pretty much anything, speak honestly and not be attacked by anyone for a differing viewpoint of belief. I find it really comforting. Theatre people are the most accepting, loving, understanding and all-inclusive group I know.

While I was in deep conversation, Michael was off with Mary, Linda and Wendy playing euchre in the card room.

Let’s Put On A Show! In typical fashion, Phil Birsh (CEO of Playbill) and Seth Rudetsky (Music Director on BOTHS) rallied the troupes — Mickey and Judy style– throwing together a really fun, entertaining show with many of the Broadway performers contributing.

Laura Osnes, fresh off her performance the night before, led off the truly enjoyable set of musical numbers this afternoon. 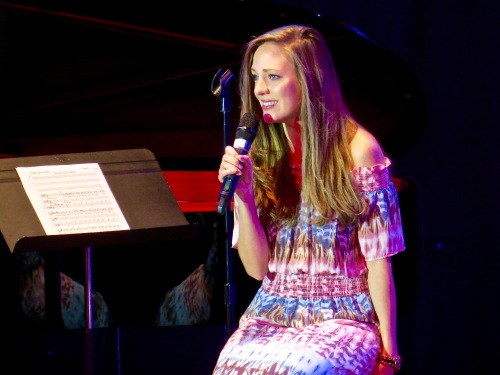 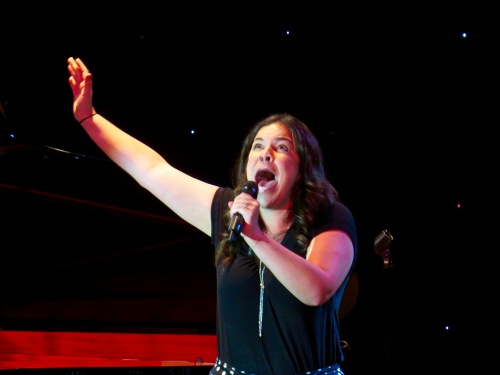 Chatterbox. As originally scheduled for late afternoon, Seth Rudetsky hosted a Chatterbox session with Brenda Braxton and his longtime friend, Andrea Burns. I always like hearing artists talk about their experiences in the business and sharing their highs and lows.

Brenda Braxton was on the cruise as a “Broadway Ambassador”, not a scheduled performer, per se. I saw her in Legs Diamond with Peter Allen many years ago and got the chance to share that with her later in the cruise.

Sea Sick? As it turned out, we really didn’t experience much rain during the day but the water was rough. It continued to be throughout the evening. I’ve been on boats that were rocking and swaying a whole lot worse but for some reason it really started to get to me at dinner. I left halfway through and Michael had my entree sent to the room.

I wanted to just stay in bed, only I wasn’t about to miss tonight’s concert. I did start feeling better as the evening wore on.

Adam Pascal in Concert. If you know me or have read my blog, you know that RENT is my all-time favorite musical. So how can I not love Adam Pascal? One of my pinnacle, theatregoing experiences was Adam’s performance of One Song Glory the first time I saw him in RENT. It’s forever etched in my brain.

Adam also starred on Broadway in AIDA, Memphis, Chicago, Disaster! and currently, Something Rotten. He also played Freddy in the highly-acclaimed concert version of Chess with Josh Groban and Idina Menzel.

The format for Adam’s concert tonight, was an informal sing-interview format with music director Seth Rudetsky. It was a great evening– showing off his versatility, powerhouse vocals and occasionally accompanying himself on guitar. 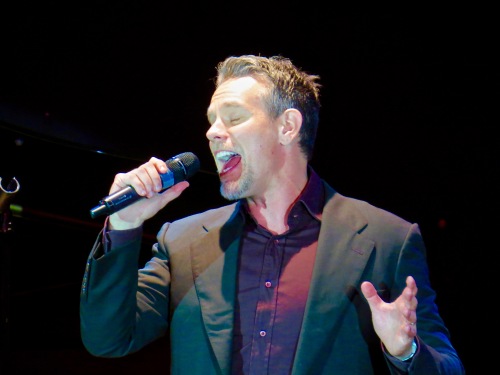 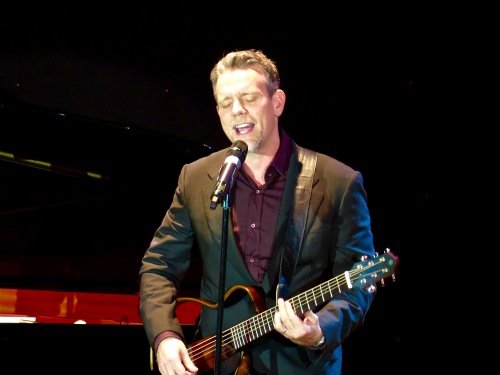 Adam Pascal accompanying himself on guitar.

After the show– a nightcap with friends and then off to bed. Tomorrow Michael and I have a private car and guide scheduled for a whirlwind tour of Malta!