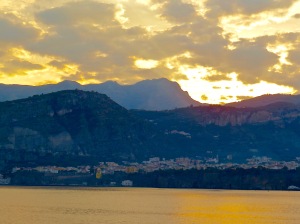 Sorrento, Italy. is our port of call today. It was a hazy morning as the sun rose, revealing more and more detail on shore. We couldn’t dock so we had to be tendered on and off the ship to the port.

Booking Excursions. We’ve had good experiences with most of the tours we’ve taken in the past. The success most often depends on the guide. Some are terrific, humorous and informative, some have great English while others struggle a little more; and some just talk way too much.

Some of the Broadway performers go out on the excursions with the guests and sometimes they do their own private tours. Today, Kate Baldwin and her friend (BFF) Amber were on ours.

We had a number of interesting choices for shore excursions from Sorrento. Way back when we booked the trip, I only had one in mind….. Visiting the ancient ruins of Pompeii.

The Dog of Pompeii. My fascination with Pompeii goes back to childhood and the short story, The Dog of Pompeii by Louis Untermeyer. It’s the tale of a young blind boy named Tito and his beloved dog, Bimbo. Bimbo stole raisin bread from the street vendors of Pompeii and that’s how he and Tito ate to stay alive. When the Volcano errupted, Tito was saved only because of Bimbo. Tito was frightened but not able to tell what was going on. It was up to Bimbo to save him. Bimbo nipped at Tito’s feet, keeping him moving away from the city to the ships in the harbor and to safety. With not enough room, Bimbo, sadly– was left behind. Eighteen hundred years later, when excavating the city, the skeletal remains of a dog were found. In his mouth was a petrified piece of raisin bread.

The story is more heartbreaking to me now than I remembered it. Still, pieces of that story have stayed with me my whole life.

So, yes. Pompeii was a must.

A little hitch at the start of the day– our coach bus had mechanical issues. We were able to squeeze on the second bus without too much overcrowding and proceeded on the hour drive to our destination. Since we joined that bus, the other tour guide had control of the intercom. She never- stopped- talking. More than one person commented, wondering how and if she ever to took a breath.

When we arrived at Pompeii, we stopped briefly at a small hotel and street market at the entrance. We split up into our two original groups and we were on our way. Our guide was also pretty talky but made up for it by being very witty and keeping our group moving.

Ruins of the ancient city of Pompeii.

Discovering Ancient Pompeii. It is believed that Pompeii was settled around 7 BC. It is also believed that there were approximately 11,000 inhabitants at the time that Mount Vesuvius erupted, burying it under as much as 20 feet of volcanic ash and pumice. Approximately 2,000 people died as Pompeii was buried. The city was lost for 1,500 years until portions started to be uncovered in the 1599. Actual excavation began in 1748.

The ancient ruins of Pompeii are one of the highly valued, UNESCO World Heritage Sites. 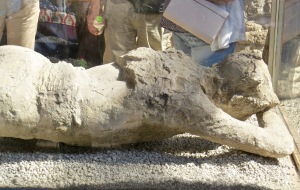 Plaster Cast of one of the victims.

As excavation advanced, it was discovered that much of the city was preserved having been sealed from air and moisture all those years. Scientists found that they were able to make castings of victims by carefully pouring Plaster of Paris into the voids as they were discovered. This resulted in capturing the exact poses of victims when they died.

The excavation of Pompeii is much larger than I’d thought it would be. Because of its massive size, it’s probably best to tour it with a guide; or at least, a map designating the highlights. There are some incredibly well-preserved rooms, complete with frescos and tile flooring.  There are many, many streets; most with just the suggestion of the original shape of the foundations surviving.

At the time of our visit, there was an incredible display of bronze sculptures by artist Igor Mitoraj that are a beautiful addition to the archaeological site. They are set to be displayed only through January 2017. In my opinion, they should stay as a permanent exhibition.

One of the larger bronze sculptures by Igor Mitoraj on exhibition throughout Pompeii.

We each had ear piece devices for the tour. It was especially handy for me when I’d get sidetracked, or veer away from the group to take pictures.

Standing among the massive ruins of Pompeii.

A portion of one of the amphitheatres in Pompeii.

Close up of surviving wall art. 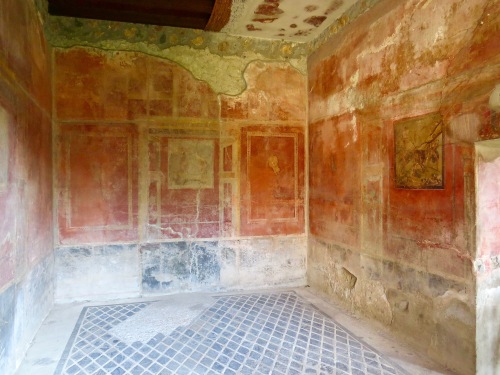 One of the more complete, excavated rooms in Pompeii.

Ruins of one of the streets in Pompeii.

Standing guard over the ruins of Pompeii.

We reached a point in the tour where, having visited the main highlights, our guide gave us the option to head back to the market or continue on with her. At the end of the tour there was to be some time for shopping or a bite to eat before heading back to the ship.

Michael and I opted to head back and had our first (delicious) slice of pizza (in Italy) from one of the vendors. Shortly after, we saw one of our new friends, Paul, who said the group was making its way back our direction. We also saw Kate and Amber strolling through the marketplace. Since we were told we’d have time for shopping, Michael and I got gelato and proceeded to walk through the rows of market vendors.

Left behind? We never saw the rest of our group and also lost track of Paul. We just figured they still weren’t back yet. I put my ear piece back in and after a moment, could hear the guide saying something about getting on the new bus and then she turned off the audio system!

Michael and I shifted into high gear but had no idea where the bus was parked. We left the market square went out to the street. We looked left and right and couldn’t figure out which way to go. I happened to see the other bus from our cruise leaving and we flagged it down. The guide said ours– was looking for us– so we headed to where that bus had pulled out. We found our bus– only our guide had gone back to the market to look for us. Oops!

We apologized to everyone as we got on, found empty seats near Kate and Amber, who seemed to be enjoying the humor of the situation. Eventually our guide came back, told us she was going to kill us, everyone laughed– and we drove off.

We got back to the port and had just missed the tender to our ship, meaning a 40-minute wait until the next one. (I guess this was our fault!) So some members of our group stood in line waiting, some shopped and others grabbed a snack.

At the port in Sorrento.

While we waited for the tender, Michael kept wandering off, out of sight, going in and out of the shops. He was making me nervous because I saw the tender coming and didn’t want to miss the next one. He reappeared and we made it on with no problem. I joked that ‘we made it‘ to Amber and Kate– and Amber said they were keeping an eye on us so we didn’t get left behind. (This became our running joke.)

Sorrento from our ship.

One of the reasons I didn’t want to miss that tender was because it was getting close to time for the late afternoon BOTHS activity, a talkback with playwrights Charles Busch and Douglas Carter Beane.

Charles Busch is an actor, playwright, screenwriter and female impersonator known for his high-camp style. He is an iconic figure in the New York Off Broadway scene and beyond. Charles is responsible for the cult classics Die Mommie Die! and Psycho Beach Party, both of which were also made into films. His best know work is The Tale of the Allergist’s Wife, that played Broadway in 2000.

Douglas Carter Beane is a prolific writer for the stage, having worked on many familiar productions you may not realize he had a hand in. He was Tony-nominated for his wonderful play, The Little Dog Laughed and more recently, his play The Nance appeared on Broadway. Douglas wrote the book for the musicals Xanadu, Lysistrata Jones and the new adaptation of Cinderella. Many probably don’t realize he also wrote the screenplay for the cult hit, Too Wong Foo, Thanks For Everything! Julie Newmar.

I found their stories and experiences fascinating and enlightening. 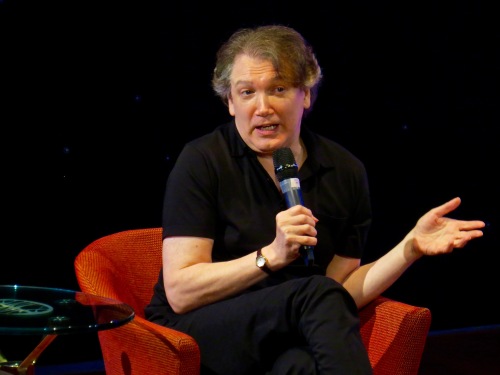 Charles Busch sharing stories of acting and performing in his own work.

We had a large group for dinner (as we did most every night) at The Restaurant (that’s actually the name) followed by one of the best sunsets of the trip. 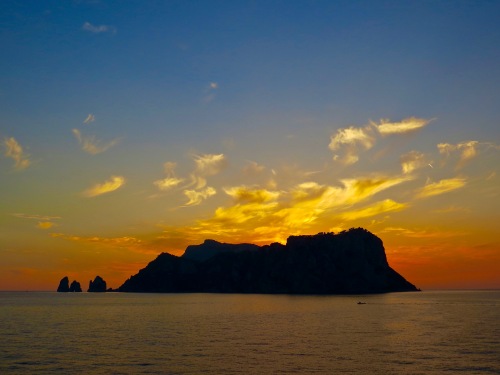 Stunning Sunset as we sailed from Sorrento.

A gorgeous view as Sunset framed this rock formation jutting out of the sea.

Laura Osnes in Concert. The main event onboard was a concert featuring Laura Osnes, accompanied by Seth Rudetsky on piano.

I started following Laura’s career when she appeared on Broadway in Bonnie and Clyde (with Jeremy Jordan) receiving high praise from the critics.

She is probably best known as the winner of Grease: You’re the One That I Want!, giving her a starring role as Sandy in the 2007 Broadway revival of Grease. I had failed to make this connection until the cruise.

Among her many credits, Laura recently starred on Broadway in Cinderella, in the title role.

It was a great concert. One of the fun highlights of the evening was bringing her high school sweetheart– now husband, Nathan Johnson on stage for a sweet duet. 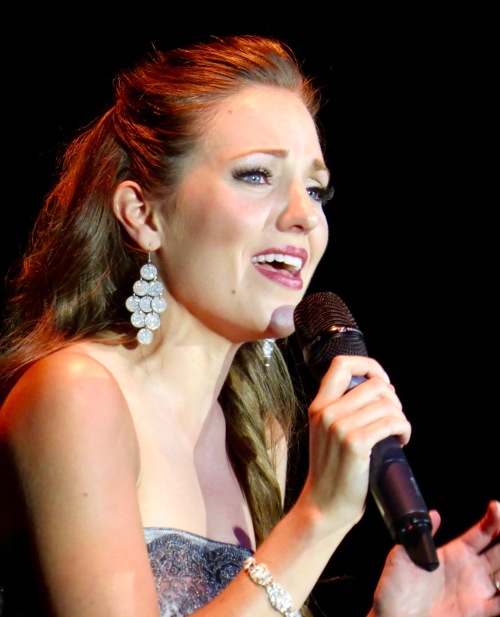 By jlinamen1229 in education, Lifestyle, travel, Uncategorized on November 4, 2016.
← Travel 2016: Day Seven: From Villa Borghese to the Silver Wind Travel 2016: Day Nine – And God Said, Let There Be Rain… And Waves…Lots and Lots of Waves →