Bonifacio is a French commune (city) on the island of Corsica (Corse). It is a fortress city with a modest population of just under 3,000 inhabitants. Though it has a Roman origin, the island changed hands several times and in 1769 was conquered by France. Still, it retains much of its Italian culture to this day.

We tendered in from our ship to the gorgeous little harbour, nestled among the high cliffs of the island. From the port, we took a short train (tram) ride– uphill, to the top of the city sitting high above the sea. 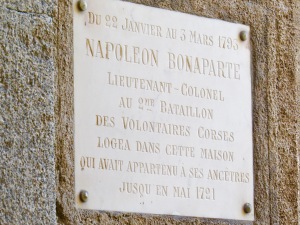 Plaque commemorating the house where Napoleon had once lived.

After a rather long-winded introduction, our guide took us through the narrow streets of Bonifacio,  pointing out several churches and showing us some of the more breathtaking scenic spots. Along the Rue des Deux Empereurs we saw where Napoleon lodged (1793) and where Charles V had lived (1541), across the street.

Bonifacio has the feel of a resort town, full of history with many quaint shops and restaurants.

Once we were oriented, we were on our own to explore. George, Mary and I chose to take a boat ride from the harbour along the coast while Michael did some shopping along the docks.

As you can see from the pictures, the scenery is just gorgeous. It was all enhanced by perfect weather and great company to share it with.

The rocky coast of Corsica. 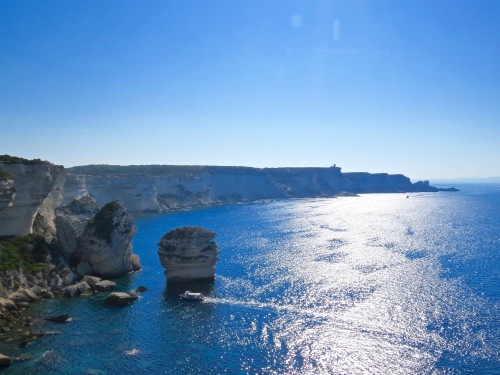 Looking out at the Mediterranean Sea. 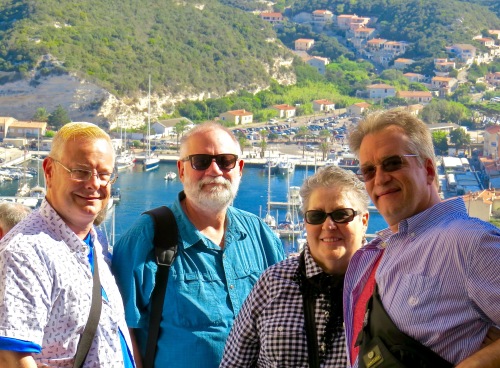 Michael, George, Mary and I in Bonifacio.

On the street in Bonifacio. 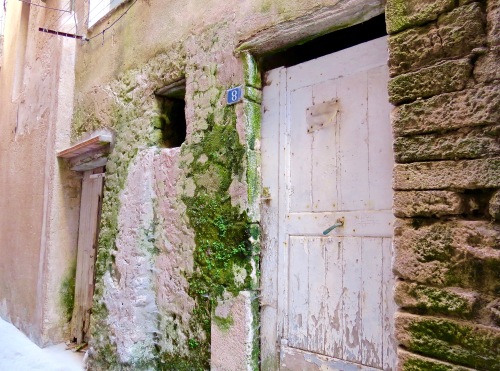 I loved the textures in this shot. 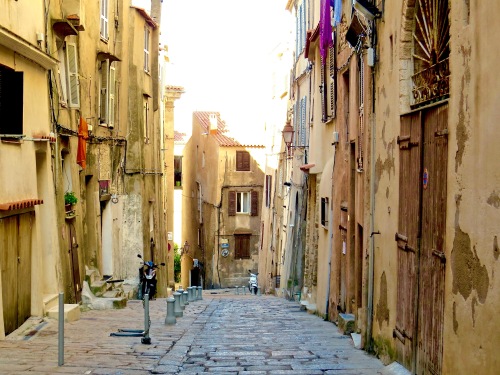 A typical street in Bonifacio, Corsica. 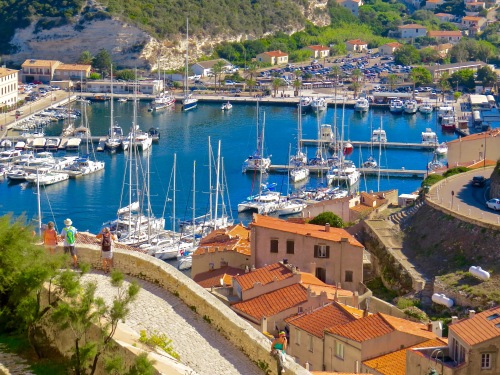 Looking down towards the stunning harbour. 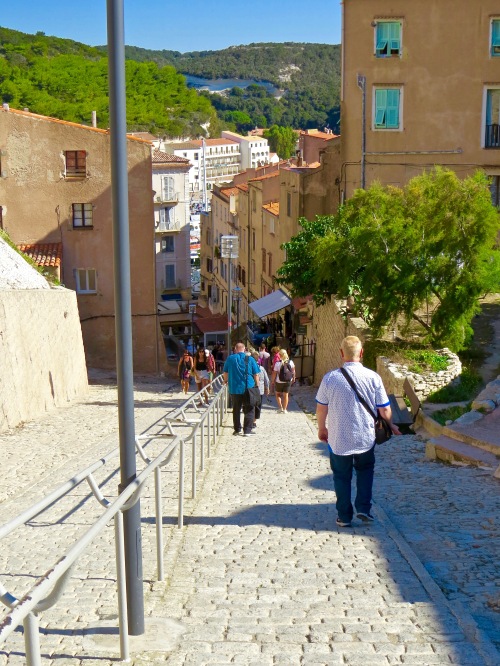 Starting the steep descent from the top of Bonifacio.

The fortress walls from our little tour boat in the harbour.

Inside the Cave of Sdragonato.

You can see where the rock of the island of Corsica changes from limestone to granite. 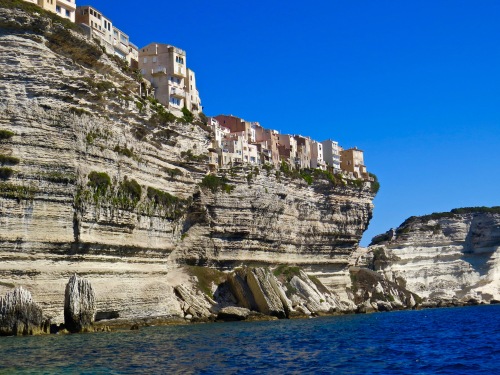 Bonifacio sitting high on the limestone cliffs of Corsica.

Last Night Onboard. The last night of a cruise is always difficult because you’re trying to say goodbye to everyone, pack and get your bags out to be moved off the ship by the staff; plus you still have dinner and a big final show. So between rushing around and trying to get everyone coordinated for our last dinner together, it was kind of a circus.

We made some great new friends and got to spend time with some of our favorite people from past cruises as well. Since many of us live all over the United States, and Anthony and Michael in London– you just never know when you’ll see each other again.

The good news is that quite a few of us have booked the Broadway on the Rhone River Cruise in May so we have that to look forward to in 2017.

The Big Show. Our final show of the cruise featured all of the performers including the ‘Broadway Ambassadors’ that didn’t give solo concerts. Here are a few of the highlights: 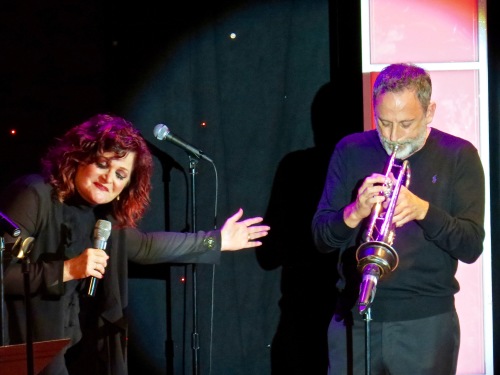 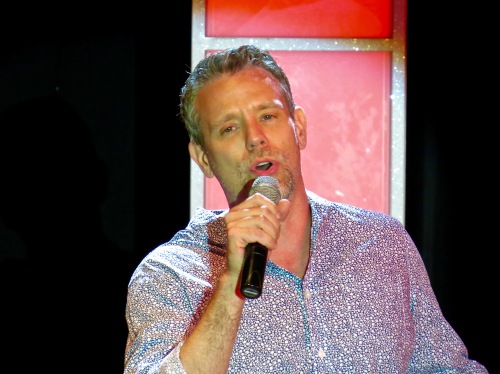 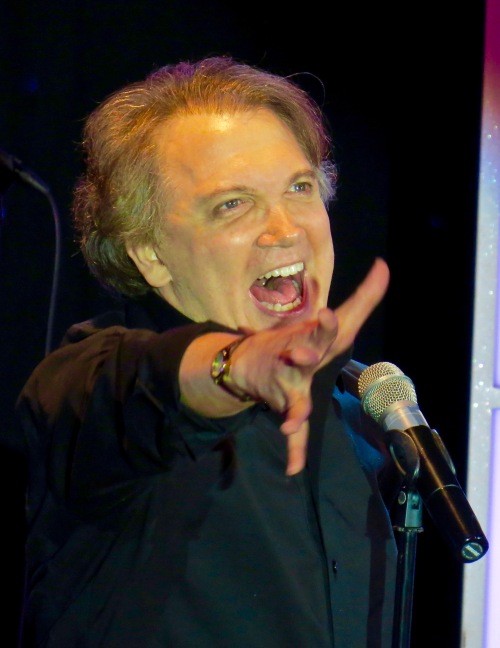 Up Late. A bunch of us congregated afterwards for the last time. Bill, Paul, Janet, Ron and a few others came and went, chatting and saying their goodbyes. Michael left to go put his luggage out- it was supposed to be out by 11:30– and I assured him I was right behind him. As everyone left, Janet and I stopped and chatted for a few minutes with Andrea Burns in the lounge.

Tomorrow we disembark and head back to Rome for a day at the Vatican.

By jlinamen1229 in Lifestyle, Photo Essay, theatre, travel, Uncategorized on November 19, 2016.
← Travel 2016: Day Twelve – The Italian Ruins of Nora and a Broadway Legend Travel 2016: Day Fourteen – Back to Rome and Vatican City →